A year on, mega Istanbul Airport serves over 40M passengers 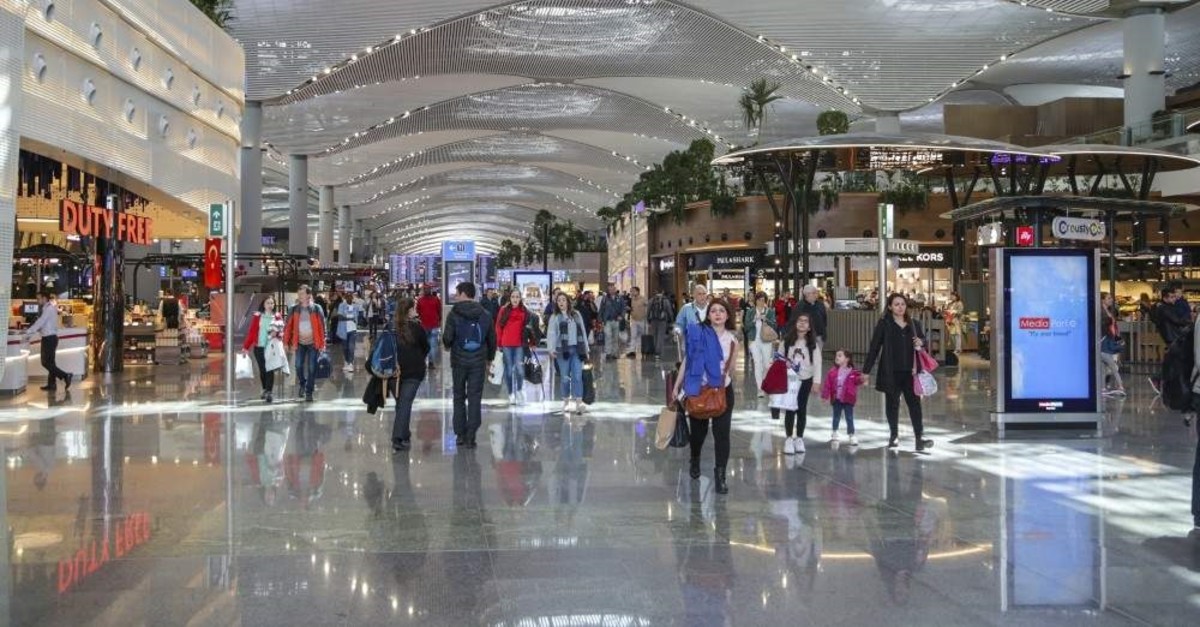 Passengers walk through Istanbul Aiport. The first phase of the airport was officially opened on Oct. 29, 2018, the 95th anniversary of the founding of the Turkish Republic.
by Daily Sabah with AA Oct 29, 2019 2:00 am

The giant new airport in Istanbul, which Turkey plans to make the biggest in the world, has served some 40.47 million passengers in its first year, since its first phase was opened in a grand ceremony on Oct. 29, 2018, coinciding with the 95th anniversary of the founding of the Turkish Republic, according to Transport and Infrastructure Minister Cahit Turhan.

Turning one today, the airport started commercial flights on Oct. 31, before the first phase became fully operational on April 7, as the airport took over air traffic from the now-closed Atatürk Airport on April 6, after thousands of tons of equipment were ferried across the city in what was said to be the greatest logistical operation in civil aviation history.

The airport, located some 30 kilometers north on the shores of the Black Sea, has so far served some 252,795 planes, including 63,856 on domestic flights and 188,939 on international flights, Turhan told Anadolu Agency (AA) on Monday.

The airport can handle 90 million passengers a year in the current phase of development, which, while it is a high figure, is nothing compared to its potential capacity to serve 200 million after the completion of all phases.

It is set to become a global aviation hub hosting more than 100 airlines and flights to over 300 destinations around the world.

Elaborating on the current situation at the airport, the minister said that the construction of the third north-south runway in the first stage of the airport continues at full speed, informing that excavation and engineering fillings were completed to a large extent on the south side of this runway, while weak excavations and engineering fillings continue in the northern part where the ground is weaker.

“Parallel to these works, asphalt pavement manufacturing continues at the second binder level starting from the south side of the runway where the filling operations are completed,” Turhan continued. “We plan to finish the third north-south runway in June next year. The construction of a Regional Air Traffic Control Center, an Air Traffic Control Tower and Airport Rescue and Fire Fighting (ARFF) Building will be completed in coordination with the third runway.”

Turhan also stated that the construction of the third parallel runway at the airport in the area of 76.5 million square meters located on the coast of the Black Sea between Yeniköy and Akpınar regions is nearing an end.

Pointing out that the runway is planned to be put into service in the summer of 2020, he said that with the opening of the runway, the Triple Parallel Runway Operation used in just a few airports in the world will be implemented.

The minister underscored that an east-west runway and a parallel taxiway will also be built in the second stage.

He emphasized that the second terminal building of approximately 450,000 square meters will be put into service when the number of passengers reaches 80 million and that an additional parallel runway with parallel taxiways and an additional apron will be used in this process.

When the number of passengers reaches 110 million, a new satellite terminal of 170,000 square meters is planned to be put into service at the end of the fourth stage, he said.

Turhan highlighted that the airport was built as an environmentally friendly, accessible and green airport that generates its own energy and continued, “Istanbul Airport will contribute not only to the development of the aviation sector but also to the development of the Turkish economy both through the investments it activates, as well as the additional employment opportunities it creates."

He added that the project, which is the most ambitious and biggest attraction of public-private cooperation projects, will be one of the world's leading airports for a long while in terms of passenger capacity when it is fully completed.