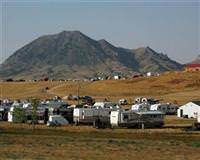 The National Trust for Historic Preservation on Wednesday published its 24th annual list in an effort to call attention to the nation's architectural, cultural and natural heritage gems that are threatened by destruction or irreparable damage.

Among them is an innovative former Pillsbury mill built in 1881 in Minnesota that stands vacant and vulnerable to piecemeal development, an outcome some hope to prevent.

Making public a list of endangered places is one way to garner support for their protection, the group said.

"We try to remind people that there are preservation opportunities in every community," organization president Stephanie Meeks told Reuters.

"We hope through this list we help people identify what is important and special about their neighborhood," she said.

Dozens of nominations were whittled down to the final list by a group of preservation experts, Meeks said.

"We're looking for things that have historic or architectural significance where there is an urgent threat and there is an opportunity for a positive outcome," she said.

Also on the 2011 list, Belmead-on-the-James, a landmark of African American heritage in Powhatan County, Virginia that is deteriorating; China Alley in Hanford, California where historic buildings lack any staff to enforce preservation protections; and Fort Gaines, a fortress on Alabama's Dauphin Island, threatened by erosion.

Specific locations comprise most of the list but it also includes a more general item -- state funding for historic preservation, which has been on the chopping block in a number of legislatures.

Since 1988, the group has identified 233 properties on its annual endangered lists ranging from nationally recognizable spots to lesser known landmarks. During that time, only eight of those have been lost.

In a new twist to this year's announcement, the group issued a "watch status" site -- Charleston. It said burgeoning cruise ship tourism could tarnish the South Carolina city's historic character and suggested limiting the size, number and frequency of cruise ships docking at downtown piers.