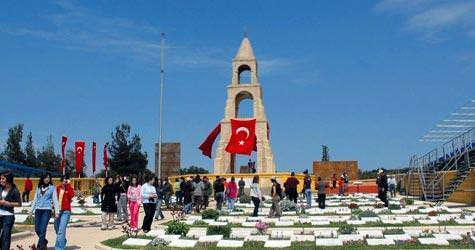 Çanakkale, currently in preparation for an explosion in the tourism industry, is about to embark upon a number of new projects. In addition to building a 500-yacht capacity marina, the region has also established an agency to help achieve the goal of hosting 100,000 tourists by the year 2015, the 100th year anniversary of the Battle of Gallipoli.

The historical Çanakkale district is preparing to explode into the tourism world by the year 2015. Considered one of the most significant battles in world history, the Battle of Gallipoli also known as the Dardanelles War, has inspired numerous visitors to frequent the region each year and now efforts to celebrate the event's 100th anniversary are frantically under way in the metropolis. The objective is to triple the number of tourists that visit the region by the year 2015, to bring the number up to 100,000. In order to achieve this objective, the Çanakkale Chamber of Commerce and Industry has joined forces with the Ministry of Culture and Tourism to establish an agency to handle the targeted demand of tourists.
THREE FIRMS INTERESTED IN MARINA
A tourism investment also planned to be established by the year 2015, is a 500-boat capacity yacht marina. Amongst the firms interested in the yacht marina are Setur, D-Marine and Ülker Group. Chamber Chairman Bülend Engin explains that they have mobilized in order to draw in industrial investments, and states, 'The yacht marina will be a start. There are a number of firms that are interested in this project. We also desire and believe that foreign firms will show as much interest in the project as domestic firms have."
Çanakkale Chamber of Commerce and Industry Bülend Engin explains that the city has one of the longest shorelines in Turkey, however they are not using this potential, and they now want to especially claim a share of cruise ship tourism. Bülend Engin also explains that due to technical issues with the Organized Industrial Zone, it is not appropriate for investments, and goes on to mention that they have received a number of efforts. Engin also stated that a western automotive firm has also made contact regarding investing in Çanakkale. Engin also added that they want to see investments in the city in the steel, automotive, petro-chemical and refinery sectors.
THE MARKET VS. THE SHOPPING CENTER
A number of projects are also in play for the city's famous open market, Aynalı Çarşı, a prime stop for tourists as well as the subject of a number of the nation's well-loved folk songs. Engin summarizes said projects as follows: "We are pushing on the button to transform the vicinity surrounding the market, into an attractive center in order to counteract the building of shopping centers in the upcoming period. The market will be covered with a steel construction as well as a special material consisting of membranes. This will allow for shop owners to have a competitive edge against Shopping Centers in all weather conditions." Another new development to encourage tourism in Çanakkale is the Troy Museum. The museum will have on display 12,336 archeological remnants, 2,747 ethnographic pieces and 15,202 old coins for visitors. The museum also hopes to display exhibits of pieces that were taken from the Trojan ruins and are presently outside of the country. In 2010, there were a total of 528,507 domestic and foreign tourists that visited the Trojan ruins.
'It needs to become a place to come and visit…'
Çanakkale Chamber of Commerce and Industry Engin summarize their vision of Çanakkale as follows: "we do not want Çanakkale to just be somewhere to pass through; we aim for it to become a place where people come and stay.'