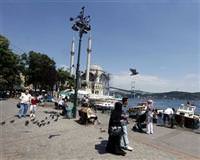 Dozens of Gulf Arab women in flowing black veils whisk through one of Istanbul's most luxurious shopping malls, clutching bags of lingerie, shoes and toys, swarms of children in tow.

The summer tourist season is in full swing in Turkey and Erkan Zengin, a store manager for an upmarket Turkish jewelry company, has reason to be happy.

"Our foreign customers are mostly from Saudi Arabia. They have good taste in jewelry and usually go for the big rocks."

A similar scene is repeated at a nearby leather shoe and jacket store, where a clerk can barely keep up with high-spending customers from the Middle East.

"They are not like Turks. They like a shoe, ask for their size, try it on, go to the cashier and pay. Turks want to try on 20 pairs of shoes before making up their mind," the clerk said.

"Our favorite customers are Arabs because of their quick decisions and high purchasing power."

Muslim but non-Arab Turkey has become a hot destination for Arab tourists and investors in recent years, emerging as a regional power in the Middle East under Prime Minister Tayyip Erdogan's AK Party.

Arab interest in Turkish culture -- from TV soap operas, pop music and food to Turkey's rehabilitation of its Ottoman history -- has helped bring an influx of Arab tourists.

Istanbul, the old imperial capital, has become a popular wedding destination for Arabs.

Escaping blistering desert summers, Arabs can also take advantage of a growing sector in Turkey that caters to devout wealthy Muslims -- hotels where men and women have separate swimming pools and beach areas and alcohol is not served.

And with "Arab Spring" turmoil scaring visitors in the Middle East and in North Africa, stable Turkey is counting on its large Mediterranean coast and rich heritage to draw more visitors.

"The Arab Spring is positively affecting our tourism revenues," Basaran Ulusoy, head of the Association of Turkish Travel Agencies, told Turkish media. "It made a positive contribution to Turkey's international perception."

Data from the Ministry of Tourism showed the number of tourists visiting Turkey increased by 14.56 percent in the first five months of this year compared to January-May in 2010.

While Germans, Russians and British tourists continue to top the list -- most of them lured to Turkey's cheaper all-inclusive packages -- high-spending tourists from Arab countries have experienced the biggest percentage jump.

The numbers speak for themselves.

In May, tourists from Yemen were up 87 percent from last year, while the rise in tourists from Saudi Arabia and Iraq was 79.3 percent and 45.84 respectively.

This is a welcome boost to Turkey's coffers, as the country struggles to plug a widening current account deficit.

Tourism is a crucial foreign currency earner in Turkey and helps to offset the widening current account deficit, which rose 77 percent year on year to $7.68 billion.

Turkey has sunk huge efforts into improving political and commercial ties with its neighbors in the Middle East, but "Arab Spring" unrest has cost Turkish entrepreneurs billions of dollars in Libya and has delayed infrastructure projects in neighboring Syria.

But turmoil in Tunisia and Egypt has also forced many to rethink travel plans and Turkey is seen benefitting, as tourist destinations in unstable countries suffered a major hit.

"Turkey is about to have a tremendous tourism season this year on the back of problems in MENA countries and new tourism investments in the country," Ozgur Altug, chief economist at Istanbul-partners BGC Partners, said.

"End-May is the official start of the tourism season in Turkey and in July-August-September the amount of FX in Turkey will reach its peak due to rising tourism revenues."

Turkey's tourism revenue exceeded $25 billion in 2010 and officials expect more cash for 2011. More than 30 million tourists are expected by the end of the year, up from 28.6 million last year.

With 48 airports nationwide, 16 of them international, and home to Europe's fastest growing airlines, Turkish Airlines, Turkey has also become a stepping stone to other destinations.

"We want especially Egypt's situation to improve soon and gain stability because with Turkey, it is part of a two-step holiday destination for American tourists," Ulusoy said.

Istanbul, Turkey's largest city and seat of Ottoman-era palaces and mosques and centuries-old bazaars, receives the most tourists followed by the Mediterranean beach resort of Antalya.

But while more Arabs are coming to Turkey, the number of Israeli tourists visiting Turkey between January and May fell by 59 percent compared to the same period last year.

About 30,000 tourists from Israel visited Turkey in the first five months of the year, compared to the 72,500 Israeli tourists who came to Turkey during the same period in 2010.

There have been signs of an early thaw in relations between Turkey and Israel, but in May the decrease of Israeli tourists was even sharper -- only 6,417 tourists from Israel came to Turkey, compared to 18,295 in the same month last year.

This does not seem to bother Zengin, the jeweller, who is looking forward to more Arab tourists.

"Our Arab A+ customers, who choose the best jewels, have not arrived yet. We can say this crowd here is B or A-, but still, we sell much more to Arabs than Turks. We are looking forward to July, when our richer customers arrive."