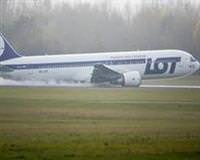 Hundreds of flights were canceled or delayed in Poland on Wednesday due to heavy fog and the closure of the country's biggest airport in the capital Warsaw following an emergency landing a day earlier.

Air traffic turmoil in Poland started on Tuesday when a plane flying from New Jersey in the United States landed on its belly at Warsaw airport after trouble opening its landing gear.

On Wednesday morning, thick fog delayed takeoffs at Poland's second largest airport in the southern city of Krakow -- which operates less than 100 planes daily -- and forced at least one plane to seek an alternative landing site.

Krakow airport was reopened before mid-day, as were two smaller ones in the central city of Lodz and the western city of Poznan after being shut or running only limited operations because of weather conditions.

In Warsaw, none of the 230 aboard were hurt in Tuesday's accident, but the airport has been closed since and live TV footage showed preparations to lift the craft from the runway.

"We have told airlines that the airport will be closed until 4 a.m. on Thursday. If we manage to remove the aircraft more quickly, we will open sooner," said Przemyslaw Przybylski, the airport's spokesman.

Passengers crowding into the troubled airports on Wednesday complained of chaos, a lack of information or enough support.

"Almost all seats are occupied, I can't even stretch my legs. I've been waiting in the line for two-and-half hours now, changing with my son. Our flight to Moscow is lost," said Krystyna Bozejko, 47, waiting at Warsaw airport.

"There is zero organization, we want our money back."