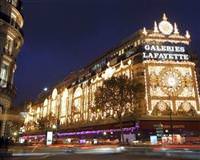 Live rock and roll is replacing recorded Christmas carols in the windows of Galeries Lafayette as the Parisian department store seeks to drum up curiosity, and client numbers, for this year's gift-buying season.

True to tradition, the shop is putting on a dazzling show for shoppers and tourists alike in the countdown to Christmas, but this year it is seeking to strike a chord with music-mad teenagers as much as fairytale fans young and old.

With a debt crisis forcing much of Europe into austerity, consumption has dropped in recent weeks, making crowd-pullers all the more important, even for upmarket stores that can count on a large tourist contingent in the heart of the French capital.

Rock legend Iggy Pop, bare-chested as always, has helped Galeries Lafayette get the show on the road, posing for photo fliers in red Santa hat and matching shoes in addition to his signature electric guitar.

The goal of reaching out to teenagers rather than toddlers is clear.

The opening weeks include nightly live shows in the window by a variety of major-label rock and folk bands, one from Mali, another from Australia and most of the others from France itself.

And apart from the live shows, furry creatures and fairytale puppets will give way this year to life-size mannequins in black leather to rag dolls draped in glamour garb -- all hand-made, hand-painted and more hard-edged than the customary annual display of smurfs, snowmen and abundant lovable puppets.

Galeries Lafayette, which first started doing its Christmas window shows after World War Two, says that this year's show was inspired by the increasingly close relationship between rock and fashion.

There are other good reasons.

French household spending dropped 1.3 percent in September versus the same month a year earlier and spending on clothing fell 7.3 percent, according to France's statistics office.

"Shoppers are so stretched at the moment that actually getting them into the stores is the first challenge," said Bryan Roberts, an analyst at Kantar Retail, an industry consultancy.

"Converting that shopper into a purchase is the next challenge."