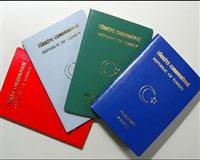 President Gül announced last week that visa regulations between Columbia and Turkey have been lifted.

After meeting with Colombian President Juan Manuel Santos, President Abdullah Gül held a joint press conference at Çankaya Palace where he announced the decision to lift mutual visa regulations. President Gül stated that they placed high importance on developing relations with Colombia on every level. In addition, President Gül announced that a Colombian embassy was opened in Ankara. A Turkish embassy has been opened in Colombia last year.
Last Update: Nov 24, 2011 5:42 pm