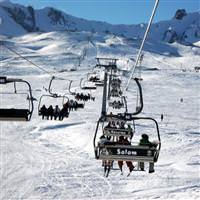 Snowfall in some of Turkey’s favorite skiing locations is bringing smiles to the faces of winter sports lovers. In Erciyes, snowfall has reached 37 centimeters, in Abant 25 centimeters, in Kartalkaya 40 centimeters and in Gölcük ten centimeters high.

With 37 centimeters of snowfall, Erciyes is officially ready for skiers. In Bolu, the heavy snowfall reached 25 centimeters in Abant, ten in Gölcük and 40 centimeters in Kartalkaya, where hotel operators were especially pleased.
Vacationers, who arrived to Gölcük for the weekend, spent their time walking along the lake and taking photos of the scenery as the entire area was covered in white snow.