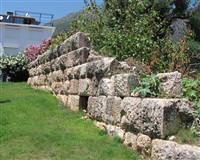 The skeletons of four children and a medallion were uncovered in an ongoing dig of a Hellenistic shrine in Antalya’s Kaş district.

An archeological dig led by Prof. Dr. Fahri Işık on a Hellenistic shrine in Kaş revealed bones of four children as well as medallion.
Archeologists Jülide Kayahan, Mustafa Şimşek and Hakan Kızıltaş and six staff from the Antalya Museum Department uncovered children's bones from the latter East Roman era. Skeletons belonging to three children were found in one tomb and another child's bones were uncovered in another. One of the children was wearing a medallion.
According to Prof. Dr. Fahri Işık, the Chair of the Kaş Hellenistic Shrine Excavations, the ruins belongs to the Hellenistic period and was built somewhere between 100 and 300 years B.C. Explaining that the structure they uncovered is quite unique, Işık stated, 'We are definitely face to face with a very special structure here. It could be a shrine or a local assembly. However, it does not resemble other ruins from the same time period. Whatever it is, it definitely has a unique plan and it is not yet exactly clear what it was."
Explaining that they have come across skeletons belonging to children which date back to the 600's in excavations of ruins from the East Roman era, Prof. Dr. Işık explains that due to the way these bones were positioned, it appears that great care was not paid to their burials. Işık goes on to state, in one tomb we found bones belonging to three children. One of the skeletons had a medallion tied to its neck. In the dig we uncovered a medallion that had a thread hole." Işık also explained that in another tomb they found bones belonging to a child as well as an earring and states that they have not yet determined the ages of the children who were buried.