Winter tourism on the rise in Çeşme 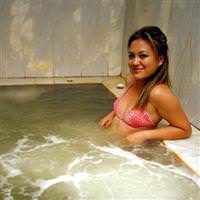 With the granting of thermal spring resources to the region’s hotels and due to the related promotional efforts, Çeşme, which is known for its sea, sand and sun tourism, is now increasingly filling up in the winter.

According to Çeşme Touristic Hoteliers Union Chair Veysi Öncel, the popular tourism spot's thermal tourism is fast on the rise.

Öncel points out that with the inclusion of thermal springs, coupled by the popular sea tourism, Çeşme's villages and seaside make it one of the world's most unique destinations. Öncel also explains that the thermal springs in Çeşme have been scientifically proven to be of higher quality compared to other thermal centers.

Öncel states that once hotels were allowed access to thermal resources, investments were directed at hotels' thermal centers and thus far 12 hotels' thermal investments have been completed which has resulted in the ongoing increase in thermal tourism.

Hotels which have set up thermal springs centers are now launching campaigns advertising Çeşme, not only as a popular seaside destination but also as a thermal spring, beauty and health tourism center, explains Öncel, who goes on to state:

''We are organizing appealing campaigns for the winter season. As a result of these campaigns our midweek capacity in the winter season has risen to between 30 and 50 percent full. On weekends we are filling up to 60 percent of capacity. We are now not only a summer destination, but also a competitive tourism destination in winter months. Due to the positive return from campaigns, we have decided to embark upon arranging even more comprehensive campaigns for next year. Some of our hotels have even decided to enlarge their thermal centers."

Explaining that in October Çeşme will be hosting the Balkan Spa Summit, Nacakoğlu states that they will be using the organization, which will be held with representatives from nine different countries, as a significant promotional opportunity.

According to Nacakoğlu, with the promotional efforts they will be embarking on, in the upcoming period Çeşme will become one of Europe's best known thermal centers.