Turkey’s tourism heads from the coast to the East 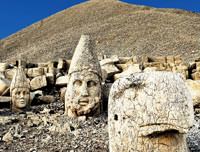 With the new incentive system on tourism investments, focus will now be shifted from the coastal districts to provinces in the East which offer significant cultural tourism opportunities. Investors have already begun looking into opportunities in the incentive regions.

The government is now offering a new incentive system for investments in regions which offer cultural and religious tourism alternatives. As a result, investors are now diverting their interests from coastal tourism to regions that fall into the alternative tourism options that focus on cultural and religious tourism. The new incentive package announced by Recep Tayyip Erdoğan which includes the tourism sector as one of the strategic sectors focused on, has pleased investors. The incentive package focuses on the division of provinces into six groups based on socio-economic development. The fifth group involves incentives for tourism investments in regions that offer a variety of tourism options divergent from the nation's popular coastal tourism. Tour operators which have regularly mentioned diversifying tourism investments have immediately began working on further opportunities following the announcement of the details if the incentive package by Economy Minister Zafer Çağlayan. Instead of focusing on investments which up until now were generally made in coastal regions and primarily Antalya, the focus will now be on tourism development regions which fall into the Ministry of Cultural and Tourism's incentive package.

RELIGIOUS TOURISM BROUGHT TO THE AGENDA

Chairman of Turkey's Hoteliers Federation (TÜROFED) Osman Ayık explains that the tourism industry, which is the most important sector for closing the current deficit gap, up until now focused on Antalya, and states, "All investments were made on coastal tourism. Investors would come from Erzurum and Konya to Antalya. Now, due to the incentives offered, they will be able to make tourism investments in their own provinces. These incentives will also redirect those who are involved in coastal tourism to other provinces in order to diversify tourism opportunities." Ayık says, "This decision will result in developing the tableau we have been longing for. Turkey's tourism will no longer solely consist of coastal tourism."

According to Ahmet Akbalık, owner of Antalya's Ela Quality Hotel, this decision was long coming. "The incentives offered before were not in line with the objective, however now there are comprehensive efforts being made. Incentive regions have been established as a result of regional studies and now we will be able to direct our investments where they are most needed." Akbalık also noted that there is currently work being done directed towards religious tourism and states that with the inclusion of transportation and infrastructure investments in the incentive system, it won't take long for these regions to develop.

INTEREST TO INCREASE IN CULTURAL TOURISM

Kappa Tur owner Kaan İşçil says that over the past four years there has been a significant increase in demand for cultural tours, which will only benefit the hotel investments in regions where cultural tourism is prevalent and included in the incentive package. İşçil says, "Hotel investments were what was lacking most in these regions. Due to the lack of facilities we were unable to respond as much as we would have liked to the demand in a number of locations where cultural tours are held. In addition, it wasn't just domestic tourists; foreign tourists were also showing significant interest. There is serious demand from the Far East and Italy markets. International companies also prefer more authentic regions to coastal hotels. "I think investments will be extremely successful," states İşçil.

In surveys conducted by both HolidayCheck and Hotel Consulting Service members, the Rixos Sungate Hotel located in Antalya's Beldibi district was selected as 2012's 'Best Family Hotel'. According to tourist reviews on HolidayCheck, Europe's most well-known holiday review website, the Rixos Sungate Hotel received the award with recommendations from 90 percent of those surveyed. The award will be presented to Rixos Sungate in an awards ceremony to be held on April 9th. Rixos Sungate General Manager Cem Uzan states, "We aim to be at the top level when it comes to customer service. We start off every season with this in mind and our customers' satisfaction becomes our source of motivation."