Istanbul visited most by German tourists 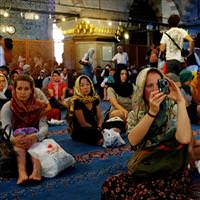 One out of every two tourists that come to Turkey, make sure to pay a visit to the mesmerizing city of Istanbul, known for both its natural beauty and 8,500 year history.

According to figures from the Istanbul's Department of Culture and Tourism, there were 451,662 visitors to Istanbul in January, in February, there were 494,124 visitors and in March 659,826 visitors, which is a 17.5 percent increase compared to figures from last year, totaling out to 1,605,612 tourists.


In Turkey overall, there were 981,611 visitors in January and 997,571 visitors in February. Accordingly, 47.8 percent of visitors to Turkey spent time in Istanbul.

From the tourists that came to Istanbul, 1,593,292 chose to fly while 12,320 preferred to arrive by sea. Compared to figures from the first three months last year, the numbers of travelers via air increased by 18 percent while the percentage of travelers that came via sea decreased by 13 percent.

In the first three month period of this year, 7,203 tourists entered the Karaköy Port for a day trip, while 14 percent of visitors arrived to the Sabiha Gökçen Airport.

Upon analysis of the nationalities that tend to visit the city, German's took the top spot with 10.4 percent. In second after Germans were Russians with seven percent. Iran followed in third with 5.2 percent, followed by Brits at 4.4 percent and Americans at 4.1 percent, followed by France at four percent, Italians at 3.6 percent, the Dutch and Libyans both at 2.8 percent, Ukrainians at 2.6 percent, Japanese at 2.5 percent Azeri's at 2.3 percent, Iraqi's at 2.1 percent, South Koreans at two percent followed by Kazakhs at 1.9 percent.

In the first three months of the year, there was one visitor each from Burma, the Faroe Islands, Belize, the Gilbert Islands, Greenland, Marshall Islands, Micronesia, Virgin Islands and Zaire.
In comparison to the first three months of last year, there was a drop this year in visitors from Japan, Spain, Italy and Israel. There was an increase however in visitors from Germany, Iran, Holland, Ukraine, Azerbaijan, South Korea, Austria, Switzerland and Turkmenistan.
The number of tourists visiting Turkey increased due to the events which transpired in Tunisia, Iraq, Libya and Egypt.

In the city, the Ministry of Culture and Tourism has 770 accommodation facilities and 392 operating facilities, totaling 1,162 accommodations with an overall 113,432 bed capacity.

According to Istanbul's Culture and Tourism Director Ahmet Emre Bilgili, figures from the first three months of this year show a 17.5 percent growth which is especially significant due to the fact that the effects of the global crisis are still evident in the tourism sector.

"The fact that Istanbul is a leading cultural, arts, history, archeology and tourism capital, and is engrained in the mind as being a site which has determined civilizations, coupled by the fact that its diversified tourism options such as, congress, gastronomy and shopping tours as well as the price quality advantage all play important roles."