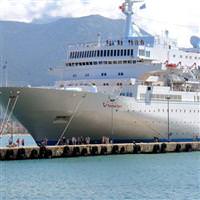 Turkey has become one of Europe’s fastest developing nations when it comes to cruise tourism.

With an increasing number of passengers and port stops, Turkey has become one of Europe's fastest growing destinations for cruise tourism. In 2011, 24,000 Turks boarded five cruise ships that toured the Greek Islands departing from Turkey's Istanbul, Izmir and Kuşadası ports.

With the inclusion of Adriatic and Mediterranean trips which departed from Istanbul, the total number of Turkish tourists who boarded cruises last year reached the 50,000 figure. In 2012, 31,000 Turks are expected to partake in cruises of the Greek Islands, which brings the total figure anticipated for Turkish tourists to board cruise ships up to 65,000.

According to Ahmet Yazıcı, the Cruise Tourism Group Manager for ETS Tour, Turkey has become a 'star country' for its growth in the cruise industry despite the economic crisis in Europe.

Yazıcı goes on to explain that cruise tourism is the fastest growing area in tourism overall, and continues to mark growth despite the economic crisis, and states, that with both the number of passengers as well as ports on offer in Turkey, the nation is experiencing high growth in the sector.

Pointing out that although 65,000 passengers actually represent a small share of the market, Yazıcı states that based on analysis of per capita income, Turkey has the potentiality to provide 90,000 passengers. Yazıcı also says that with the potential of price drops in the tourism sector coupled by early reservation options, they foresee reaching the 90,000 passenger figure soon.

TURKISH PORTS ARE 'IN'

Yazıcı also expresses that in additional to the domestic market, they also anticipate a significant increase in the number of ships that make Turkish ports a destination spot. Due to the Arab Spring, routes have veered from Egyptian to Turkish ports, and therefore this year they decided to make Turkey their preferential destination, explains Yazıcı. Pointing out that every year the number of ships that establish Turkey as a destination is on the rise, Yazıcı points that as a result this year they are anticipating an even heavier season in Turkey's Istanbul, Izmir and Kuşadası ports. Yazıcı also stated that the cruise sector was not negatively affected from the accident in Italy and pointed out that ships are still the safest method of transportation. Yazıcı goes on to state that they foresee a significant increase in the number of ships that stop in Turkey's Aegean and Mediterranean coasts as well as in Istanbul over the next five years and points out that stopping at Turkish ports have now become a trend in the sector. "There are also efforts being made to open up the Black Sea coast to cruise tourism. There are initiatives being made in order to organize tours departing from Istanbul that go to Odessa, Yalta, Köstence and Trabzon. The effective use of the Black Sea would also work towards increasing Turkey's share in this market."