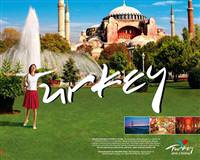 Minister of Culture and Tourism Ertuğrul Günay released a message on April 15th in honor of Tourism Week in which he stated that the ministry has developed a number of new and transparent methods in order to raise the nation to become one of the leading countries in the world for tourism.

In his message, Günay expressed that tourism, which partners with economic, social, cultural and political aspects, is a sector that sheds light on the world as a project of peace. Günay goes on to state that tourism takes on a significant duty in terms of economic development, while with its ability to bring together diverse cultures, also serves world peace and harmony which is what is most in demand in this world.

Pointing out that by being a stop for a number of civilizations and a mosaic of culture, Turkey's natural wonders and historical treasures makes it a significantly unique location in the world, Günay went on to state the following:

''Our efforts are ongoing with great sensitivity in order to promote Turkey's unique qualities and to make it take on a brand status which will be known all over the world. Our country which, despite the economic crisis, continues to display stable growth making it one of the top ten tourism countries in the world. Contributing both culturally and artistically to the tourism industry, our country has recently grown by ten percent, becoming the world's top seventh country in terms of tourism."

Günay explained that as a ministry they have developed a number of new strategies that will make Turkey one of the leading tourism nations in the world and that they are placing heavy emphasis on PR efforts.

Expressing that prominent tourism nations prosper due to their cultures as well as infrastructure and that they do not discriminate according to seasons in caring and protecting their historical and natural beauties and place significant importance on infrastructure and cultural values, Günay went on to state the following:

''It is with these sentiments that we celebrate this year's opening of Tourism Week in Şanlıurfa as we do throughout the country every year and I want to express my sincere love and respect to all of our partners that exert efforts for tourism in our nation."