Dinosaur tourism at your service 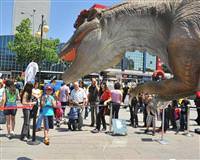 Investments are on the rise to draw out tourists that have succumbed to the all-inclusive holiday system which has taken over Antalya in recent years.

While efforts are ongoing for projects such as to build an aquarium and theme parks intending to attract tourists to the city, Kemer's Göynük district has opened Turkey's first and Europe's largest dinosaur park.

Dinopark, which is the work of three young engineers, carries much significance in terms of diversifying tourism attractions in the region. Tourists have already begun flocking to Dinopark. The park, built on 30 decares of land with an approximately five million dollar investment, contains identical replicas of 28 different dinosaur generations that have gone extinct. The models, which are very true to life, have the capability to move and emit sound allowing visitors the opportunity to see a replica of dinosaurs which went extinct 65 million years ago at a distance close enough to touch.

An investor in Dinopark, Tetra Group Executive Board Chairman Mustafa Erkan explains how the idea came about. "Interest in dinosaurs increased after Steven Spielberg filmed Jurassic Park. As a result, dinosaur-themed parks practically became a phenomenon. People began flocking to them from all over the world. We decided we wanted the tourism industry in Turkey to also boast one of these visitor-attracting parks." Erkan went on to express that they have plans to invite Steven Spielberg to visit the park.
Abdullah Eş, another Dinopark partner, says that construction lasted five months. Eş went on to explain that the replicas internal machinery came from Canada, while their bodies came from China. Expressing that each model is an exact replica of a type of dinosaur, Eş states, "There are signs in front of each model which provides the dinosaur's name, their past, what they ate and in what environment they inhabited."


Explaining that there are moments when he is startled by the sound of the dinosaurs, Eş notes that the park is not only a point of interest for children but also attracts adult visitors. Eş also revealed that in addition to the dinosaur park they have also built a scary theme park. "At this park, we have moving figures that resemble witches and zombies from horror films. It is so to speak, a mad house."