Israeli visitors to Antalya are on the rise 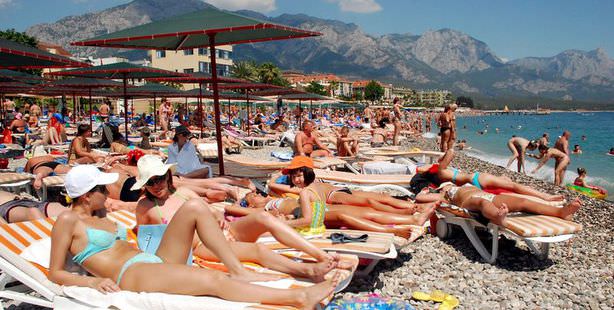 When last March only 363 Israeli tourists visited Antalya, this year the number has gone up to 4,117 for the same month alone.

According to a written announcement released by Antalya Chamber of Trade and Industry (ATSO) Executive Board Chairman Çetin Osman Budak, figures from the Ministry of Culture and Tourism show that Israeli visitors are now increasingly selecting Antalya as a preferred destination.

Budak pointed out that in March of 2010, 13,787 visitors came to Antalya from Israel, however in 2011 that figure dropped to 267 and in 2012 to 363. Budak stated that this year's figures show a recovery with 4,117 Israeli tourists visiting Antalya in March of this year.

Budak pointed out that the number of visitors this March shows over a one thousand to one hundred percent increase and stated, "The numbers show that Israeli tourists are beginning to return to Antalya. The initial signs of this revival actually surfaced in February. This past February, 1,221 Israeli tourists visited Antalya, whereas only 12 did during the same month the year prior. We are also seeing a rise in the number of Israeli visitors throughout Turkey; however Antalya is going through a fast transformation. As of February the number of tourists who came to Turkey from Israel increased by 82 percent to reach 5,000."

Remarking that he is pleased to see the contribution Antalya makes to the development of international peace, Budak went on to state, "Antalya has proven in the best way possible that it is a true tourism center in which millions of people from different countries and religions can vacation in peace together. The actions and mistakes on behalf of the Israeli administration are of course independent of its citizens. Every season, Israeli tourists had become the traditional visitors to Antalya. We are hoping that the reactions between our two governments will reflect much more positively on tourism. We welcome our Israeli visitors just as we do our guests from other nations with the wish of friendship and peace," stated Budak.