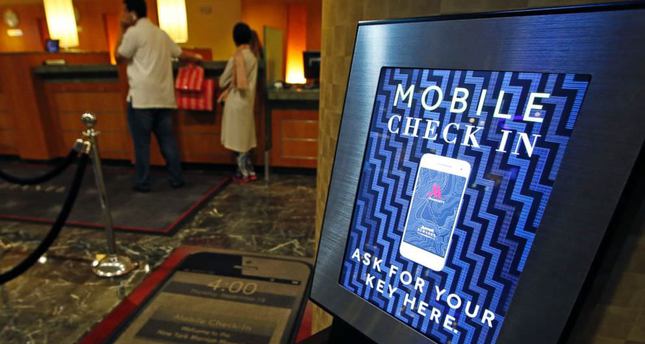 by Daily Sabah with Agencies
Nov 05, 2014 12:00 am
New computer programs are helping to speed up the hotel check-in process for busy travelers by letting them go straight to their rooms by using their smartphone to unlock the door.

The innovative programs are still being tweaked as hotels scramble to catch up to airlines in terms of maximizing the convenience they can offer to travelers. Fliers today use their phones to check-in, select seats and act as a boarding pass. Hotels envision a similar relationship with guests ultimately ordering poolside drinks, hotel services and room service via an app.

On Monday, Starwood Hotels and Resorts became the first chain to let guests unlock doors with their phones. The feature is only available at 10 Aloft, Element and W hotels, but will expand to 140 more properties in those brands by the middle of next year. Hilton Worldwide is the only other hotel chain to publicly acknowledge plans for starting to use mobile room keys.

"Straight to the room" technology, which enables mobile phones to be used as room keys, will be introduced to Hilton hotels all over the world including those in Turkey. Speaking to Daily Sabah, a spokesperson for Hilton Worldwide said the technology will be implemented in all Conrad Hotels in the U.S. by the first half of 2015. The other Hilton Hotels and Resorts, Waldorf Astoria Hotels and Resorts and Canopy by Hilton hotels in the U.S. will begin using this new technology in summer of 2015. Although it is not confirmed, the technology is expected to be used in Turkey by 2016.

Other hotel companies are finding other ways to streamline the arrival process.

Marriott International launched the ability to check-in through its app at 330 North American hotels last year. By the end of this year, the program will be live at all 4,000 hotels worldwide. When a room becomes available, a message is sent to the guest's phone. Traditional room keys are pre-programmed and waiting at the front desk. A special express line allows guests to bypass crowds, flash their IDs and get their keys.

At Hilton, all 4,000 properties worldwide will have a similar check-in by the end of 2015. The one added feature: Guests can use maps on the app to select a specific room.

InterContinental Hotels Group is testing express check-in for its elite loyalty program members at 500 hotels, primarily in the U.S.

The services are geared toward road warriors who do not want to slow down, even for a second. Guests who like personal interaction can still opt for a more leisurely check-in, and hotel companies say the move is not about cutting jobs. Daily Sabah with agencies