Turkey’s castles take you on a journey through history 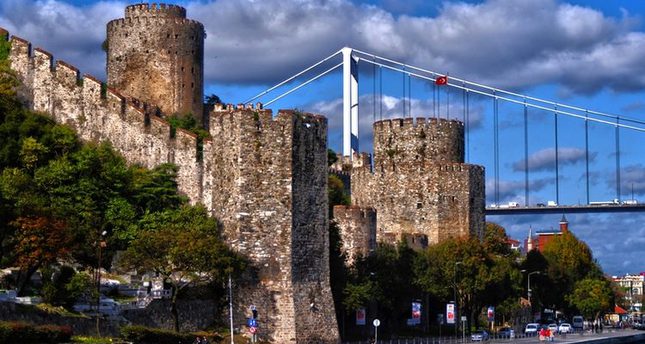 Hosting many civilizations on its soils, Turkey invites tourists who are willing to witness the fortified remnants of dozens of castles and fortresses

Embracing many civilizations throughout its history, Turkey is one of the countries that drew attention with its beauty, strategic location and proximity to the Middle East's earliest civilizations. When you look at travel brochures about Turkey, you will mainly find the seas, beaches and tourism centers highlighted throughout; however, the country also hosts many castles belonging to historic empires and civilizations. Visiting these castles and fortresses is a must to understand this history.

Most of the castles in Turkey belong to ancient and medieval civilizations while fortresses belong to the Ottoman, Byzantine and Seljuk empires. Castles translates to "hisar" or "kale" in Turkish, so you will see the suffix of "kalesi" or "hisari" after the noun of these castles. Due to its strategic importance, the castles and fortresses were built in prime locations to observe the surrounding terrain. That is why they are situated on high points in cities: To signal an approaching army and protect the inhabitants. Castles in Turkey have many different styles of architecture and design. Even though they look different than each other, their fortifications are similar since they are defensive structures built to withstand attacks. Today, these castles do not serve a militaristic purpose, but they are amazing spots to look out over a city and if you are lucky enough, the sea as well.

There are dozens of castles and fortresses in Turkey and in this article, we will review some of them in order to help you witness the diverse culture and history of the country.

Mardin Castle: The only castle never conquered in southeastern Turkey

Called "Eagle Castle" for years, the Mardin Castle in the southeastern city of Mardin is situated on top of a rocky hill. The castle hosted many emperors and kings, including Subari, Sumerian, Babylonian, Mitanni, Assyrian, Persian, Roman, Byzantine, Ummayad, Abbasid, Hamdani, Seljuk, Artuqid, Qaraqoyunlu, Akkoyunlu and Safavid rulers and the Ottoman sultan. Throughout its history, the castle has seen many victories and disappointments. A king called Shad Buhari, who idolized the sun in 330, lived in this castle for 12 years and cured his sickness in this castle. Experiencing many stories of historic civilization, the castle bears witness to history on the outskirts of Mardin. The remains found there suggest that the castle was also used for residential purposes. Furthermore, the famous Ottoman explorer and writer, Evliya Çelebi, who traveled and wrote about the Ottoman Empire and its neighboring lands for over 40 years, described the large quantities of ammunition and food in the castle's storage rooms. What makes the castle so unique is that it has never been conquered – even though it hosted many civilizations throughout its history. It has such powerful doors and magnificent views that many poems were written to tell the story of Mardin Castle. The structure spans 1-kilometer in length and varies in width between 30 to 150 meters. Situated at more than 1,000 meters above sea level on solid rock, the 3,000-year-old castle was of vital strategic importance. To demonstrate the magnificence of the castle, it has been said that in Mardin, if you look through "Eagle Castle" from its southern part, you may mistake thousands of lights with the stars in the sky. The castle, closed to tourism during the Cold War period and used by NATO, has been used by the Weather Radar Commandership for the past 60 years. Many civilian attempts to restore the castle have all been met with bureaucratic obstacles so far. After a long wait of 218 years, restoration work on the magnificent castle finally began in March. The restoration work costs approximately TL 20 million ($9 million) and is expected to open to tourists soon. If you have a chance to visit Mardin, which is one of the most multicultural and historic cities in Turkey, seeing the Mardin Castle should be a must-do for you.

Accepted as a legacy of the Ottomans, Rumelihisarı, a fortress located in the Sarıyer district on Istanbul's European side was built across from the Anatolian fortress, Anadoluhisarı, on the Asian side of Istanbul between 1451 and 1452 upon the order of Ottoman Sultan Mehmet II, one year before the conquest of Constantinople by the Ottomans to prevent Crusaders coming from the Black Sea. The location where these two fortresses stand is known as the closest point of the Bosporus. According to legend, the fortress was built in three months, is located on an area totaling 31,250 square meters and has a magnificent view from the fortress and looks just as glorious looking at it while on a Bosporus boat trip. Partly ruined in the 1509 Istanbul earthquake, the fortress was renovated in a short time. But then, the wooden parts of the fortress were damaged in 1746 due to a fire and Selim III renovated it between 1789 and 1807. Today, the fortress is used as a museum and open air theater. Some remains from the Ottoman Empire are also on display in the fortress. Near the fortress, there are dozens of fish restaurants and in the summer, concerts are held in the fortress. When visiting Istanbul, Rumeli Hisarı is a must-see spot to witness the story of one of history's most famous conquests.

The sultan's palace in the southern city of Antalya

Antalya Castle in the southern city of Antalya is a medieval castle built in the 13th century under the order of the Seljuk Sultanate of Rum following the conquest in 1220 by Alaeddin Keykubad I. The sultan's building schedule in those times included the walls, citadel – known as the inner fortress – the red tower, the dockyard and the arsenal. Because it is constructed over the remnants of earlier Byzantine and Roman-era fortresses, it took only three years to complete the castle after the conquest and according to archeological research, the castle was used by the sultan as a palace. The castle is located 250 meters high on a rocky peninsula looking over the Mediterranean Sea, which protects it from three sides. The castle has a strategic location, but it was mostly used for defensive purposes during the Ottoman Empire since the area was pacified during those times. Dozens of villas were built inside the walls during the 19th century, and today, the castle is an open-air museum. Access to the seaward castle is ticketed, but much of the area inside the wall, including the landward castle, is open to the general public. If you visit Antalya, which is one of the most tourist-friendly cities in Turkey, you should definitely include seeing the Antalya Castle among the your other planned activities during your stay.