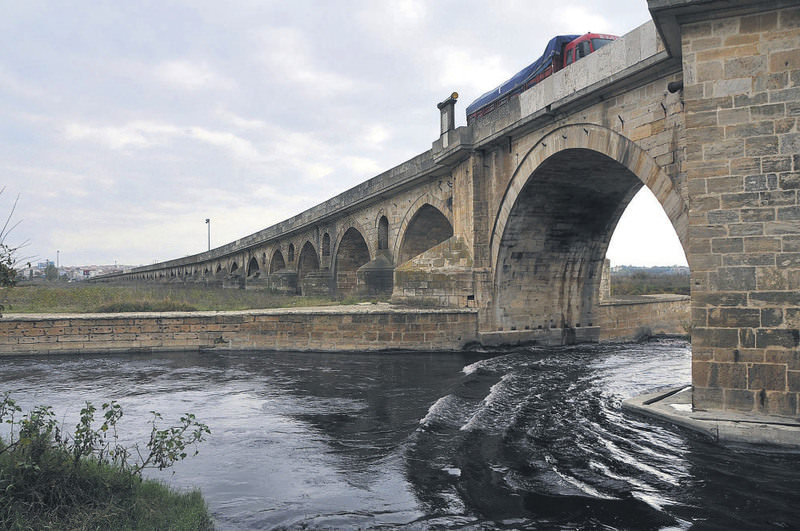 by daily sabah Apr 24, 2015 12:00 am
Turkey's longest stone bridge at 1,393-meters-long, the 572-year-old Uzunköprü Bridge has been listed on UNESCO' s Temporary Tangible Cultural Heritage List. Edirne, which was the capital of the Ottoman Empire for 92 years, has a large number of historical buildings. The bridge follows its fellow Edirne heritage list makers, the Selimiye Mosque and Historical Kırkpınar Oil Wrestling. Two months ago, the Edirne Governorate submitted the necessary documents to the Ministry of Culture and Tourism to apply to UNESCO, and the bridge, which gave its name to a district with a population of 40,000, made it onto the temporary list. In a statement, Edirne Governor Ali Şahin expressed his happiness about the Uzunköprü Bridge's success. Emphasizing that they had been working on the project for a long time, Şahin said it is exciting for the bridge to be listed on UNESCO' s Temporary Tangible Cultural Heritage List. The governor also heralded that they will submit applications for the Üç Şerefeli Muradiye and Beyazid-i Veli mosques in Edirne. "All these historical buildings are in Edirne. The city is very lucky," he said. The Uzunköprü Bridge extends over the Ergene River and it is the only stone bridge connecting Anatolia to the Balkans. The bridge, whose old name was Ergene Bridge, was built between 1426 and 1443 by head architect of the Ottoman Empire, Muslihiddin, on the orders of Sultan Murad II. The stone bridge is 1,392-meters long and up to 6.8-meters wide. The Uzunköprü Bridge was made to cross the natural river barrier for the Ottoman Empire during its campaigns into the Balkans and enabled the army to continue its advance in the winter.
Last Update: Apr 24, 2015 11:57 pm
RELATED TOPICS