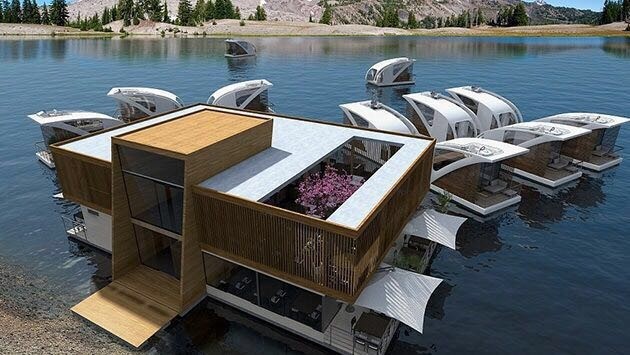 by Anadolu Agency Apr 07, 2017 12:00 am
An entrepreneur in the southeastern province of Şanlıurfa is planning to build "floating hotels" on the Euphrates in the region which was submerged during the construction of the Birecik Dam.

Amid aims to generate touristic activities along the Euphrates, both the Turkish state and private investigators are investing in the region which is one of the largest river basins in Turkey. Many projects have been introduced to allow local and international tourists to take tours along the Euphrates which runs through areas with historic stone houses and unique natural beauties; beautiful attractions that have failed to garner the same level of interest as the "floating hotels" project.

A local entrepreneur making investments in tourism and the launcher of the project, Salih Kurt, was inspired by the floating houses he saw while on a visit to the Netherlands - a unique concept that he decided to bring to Şanlıurfa's submerged region, Halfeti, with the construction of the Birecik Dam, in the form of "floating hotels." He returned to his native Turkey and began designing hotel rooms on 30-square-meter wooden boats. Currently, the entrepreneur continues to invest in his projects and aims to introduce this entirely new concept in tourism to tourists on the shores of the Euphrates, an iconic river which is known for its natural beauties and serene atmosphere.

Initially, "the floating hotel" will be built across a total of 12 wooden boats. If the necessary approvals are granted by the Şanlıurfa Metropolitan Municipality and the General Directorate of State Hydraulic Works, the floating hotel project will be inaugurated this summer.

Speaking to Anadolu Agency (AA), Kurt asserted that the Şanlıurfa region attracts more and more local and international tourists every year. Stating that locals in the region want tourists to discover their homeland extensively, Kurt said local investors are working hard to introduce alternative tourism activities in the region.

Kurt said that he presented his "floating hotels" project to relative state officials wary of the fact that it is a widely unheard of concept in Turkish tourism. "This year, Turkey will experience a tourism boom according to the initial expectations. Halfeti is labeled as a "cittaslow" and we intend to improve touristic activities in the province with new initiatives such as this one. Our hotel rooms will be rented out daily and the facility will run on solar power. The rooms will be in the shape of boats and the guests will be able to take a tour on the Euphrates River and accommodate in the location they desire. The managers and the guests will communicate with each other using walkie-talkies," Kurt said.

The cost of the project is estimated at TL 2 million and will be the first of its kind in Turkey.

Şanlıurfa Metropolitan Municipality Mayor Nihat Çiftçi also offered insights regarding the project and the touristic activities in the region, saying that Euphrates boat tours are one of the most widely preferred and entertaining forms of tourism in the region. Reminding that the region is home to important wetlands such as the Atatürk Dam and the Euphrates, Mayor Çiftçi said the municipality has plans to utilize the wetlands more and more in tourism developments in the future. Mayor Çiftçi also shared plans to initiate ferry services on the river, noting: "Investments in tourism and transportation are very important to us. There are beautiful and important historic sites along the coast of the Euphrates. We are supporting tourism initiatives in the region."
RELATED TOPICS