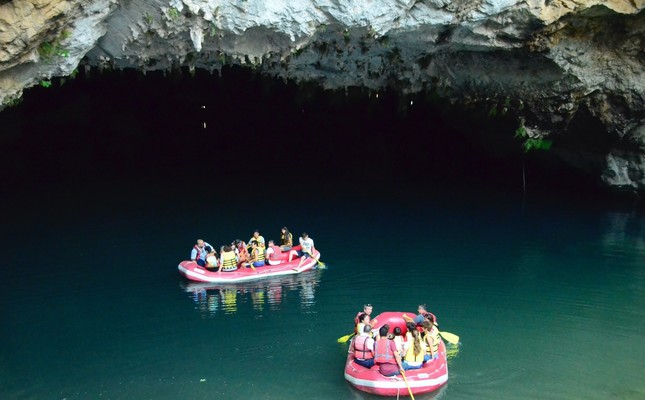 Altınbeşik Cave in the southern city of Antalya, famous for its stalactites and stalagmites, white-colored travertines and pond formations, provides a visual feast.

The cave, which is located within the border of İbradı, carries the traces of millions of years of formation. It is seven kilometers away from İbradı and four kilometers from Ürünlü and is a natural wonder.

White-colored and thick travertines are the most beautiful part of the cave. Two-hundred meters of the three-story cave is open to visitors. Tourists who visit the cave, the water depth of which reaches 40 meters at some points, rent a boat to see its natural formations.

He stressed that researchers from the Czech Republic went to a depth of 5,500 meters and other beauties in the cave will be discovered with further investigation.

Çavuşoğlu stated that 190 meters of the cave could be visited with a boat. "Stalactites and stalagmites attract a huge amount of visitors. It is an extraordinary cave. It is known to be good for asthma and psoriasis due to its alkaline water. The Altınbeşik Cave is open to visitors throughout the year. The inside temperature is stable at 16 °C in summer and winter. It has been formed over millions of years. The Altınbeşik Cave with its lake inside being the largest in Turkey and the third largest in the world fascinates tourists. The number of visitors increases each passing year. This number has increased by 50 percent this year compared to last year. Nearly 12,000 tourists visited the cave this year," Çavuşoğlu added.

He said that they are happy with the attention the cave is getting and they expect the number of visitors to increase after it becomes more popular.

Share on Facebook Share on Twitter
Previous in Travel With perfumed gardens, mesmerizing art and architecture, exquisite... Next in Travel As people begin to decide where to spend their holiday time, many...
DAILY SABAH RECOMMENDS