Feel the rhythms of Northern Cyprus 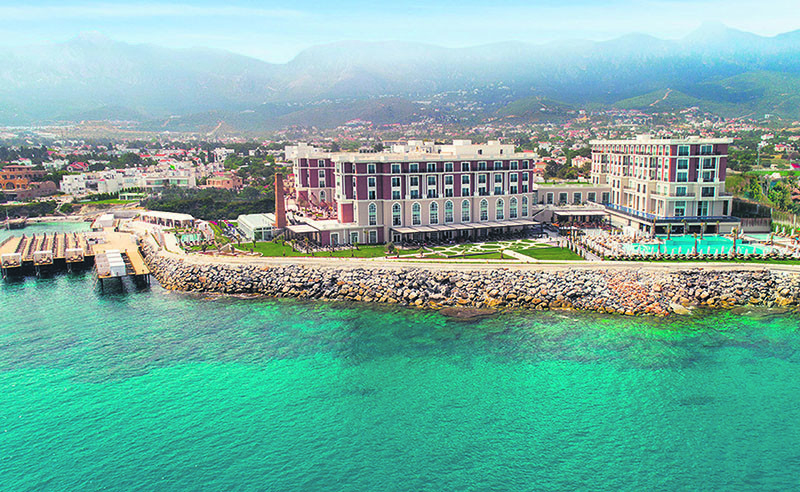 A close getaway for those living in Turkey, Northern Cyprus is a paradise with its hot climate, amazing sea panoramas and perfect hotel and restaurant options

Cyprus, the third largest island of the Mediterranean after Sardinia and Crete, continues to host millions of tourists with its historical and natural beauties. Kyrenia in Northern Cyprus is offers a unique vacation with its 5-star hotels, luxurious decorations and VIP services. With warm weather throughout the year, the island's popularity is increasing day by day, and new investments and international brands are coming to this Mediterranean paradise.

One of these is the Kaya Palazzo Resort. The hotel in Kyrenia is the second hotel after Kaya Artemis of the same group in Northern Cyprus. Inspired by the Versailles Palace, the hotel's architecture, with all the details, makes you feel like you are in a palace. The antique clock at the top of the hotel, old statues, and paintings from the halls of the Versailles Palace, marble columns and luxurious furniture are ostentatious to a degree which will make you feel like you are in a palace. The accessories used in the hotel in general are also quite different and modern. The biggest example of the hotel's mixed design of modern and classic, on the other hand, is the giant gold-coated dinosaur skeleton. This skeleton at the hotel's terrace is placed in a display window. At night, when the torches around it get lit up, the skeleton's glow creates a pleasant ambiance. Pleasure of hookah on the terrace is yet another enjoyment. Also, the wide sofas are a design masterpiece.

Each of the 261 rooms of Kaya Palazzo are in the palace concept. I witnessed the largest minibar I ever saw in my life, even after seeing the ones in Las Vegas hotels, here. I especially loved the colorful pillow patterns. Hermes brand products are used in the bathrooms. The statues seen around the hotel are also in the rooms. Most of the rooms have a sea view, perfect for enjoying the sunset. Besides the sea view and the palm trees, the historical chapel right next to the hotel adds a unique sense to the view. The beach area of the hotel is pretty small. But there is a huge pier area. There are chic cabanas on the pier. They have created a beach-like feeling on a certain part of the pier by pouring sand on it. The hotel's pools, on the other hand, are both big and also pretty enjoyable for children. They have even made playground for kids next to the pools. A detail which really impressed me, is that the design at the bottom of the pool and the patterns of the decoration in the garden were the same. I love this kind of detail orientation and perfectionism. 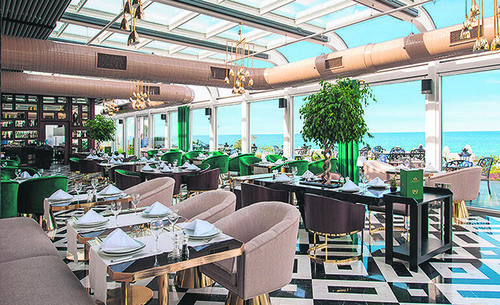 The real reason of my visit to Kaya Palazzo Hotel beyond all this luxury and pleasure was the opening of SKY KYREINA, a branch of the famous nightclub in Beirut. Kaya Palazzo has added spectacular value to Northern Cyprus by opening this globally well-known club. A spectacular opening with dance shows, lighting, decoration and of course, world famous DJs took place. Light, sound, and smoke shows were as impressive as the dances. I really liked the fact that sea was visible from the lodge boxes. Locals and tourists who know of Skybar completely filled up the place meant for 400 people. Skybar Beirut's CEO, Chafik Al Khazen, was also among the hosts. I congratulate the hotel's owners, Burak Kaya and Doruk Kaya, who are the architects of Skybar's arrival in Northern Cyprus.

Two restaurants in Skybar are pretty impressive. The first one is Mezzo. The fish options at the restaurant, which serves Turkish tapas and appetizers, were quite good. I especially loved the shrimp with avocado. I recommend you try to make a reservation in advance. Another striking restaurant is Dragon. As can also be understood from its name, the restaurant, serving far-east food is pretty authentic. Blue porcelain dishes and bamboo plants create a pleasant ambiance. Besides sushi options, I loved the duck meat. Food options in the hotel's main restaurants, on the other hand, are also pretty rich. Especially the lobster served at brunch on Sunday was marvelous. I have not seen such generous presentations in many hotels. The stuffed apricot and date jam were among the unique flavors at the hotel's open buffet.

The restaurant I loved the most at the Kaya Palazzo Resort was Develi Kebab. I realized that, Develi, famous with its branches in Istanbul is also liked with its first branch abroad. I loved its sea view and modern architecture. I especially liked the dinner tables with trees on top of them and the sea green sofas were fantastic. Marble flooring and brass tables make you feel like you're in a fine dining restaurant rather than a regular kebab place. Out of the dishes, I liked the lahmacun and pistachio kebab the most. Nuri Develi's attention and service quality of the team, on the other hand, were above everything else. It is a pleasure to see Turkey's leading kebab brand seeing success abroad.