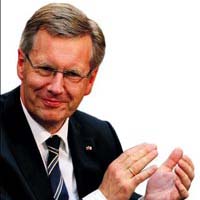 On Monday German President Christian Wulff will arrive in Turkey for his third state visit in his three months since becoming head of state - and this ostensibly ceremonial visit will be the most difficult by far.

Berlin/Istanbul - On October 3 Wulff, a conservative ally of Chancellor Angela Merkel and former regional premier, added fuel to an increasingly heated debate about the place of Islam in German society.

'By now, Islam belongs in Germany,' Wulff said, to the chagrin of many conservative colleagues who wish to preserve what they see as Germany's mainstream judeo-christian culture.

Since then, Chancellor Merkel has proclaimed that 'multiculturalism has utterly failed' in Germany.

Most of Germany's four million Muslims are of Turkish ethnicity, the families and descendants of the tens of thousands of Anatolians came to the former West Germany as 'guest workers' who were greatly needed during the booming economy in the 1960s.

Wulff is set to give a speech before the Turkish parliament on Tuesday, and the event is being keenly awaited, and not just because it is the first time that a German head of state has addressed lawmakers there.

His recognition of Islam as being part of German culture despite the rancour at home has won him the highest praise in Ankara.

'I very much appreciated his speech on the 20th anniversary of German reunification (October 3),' Turkish President Abdullah Gul said.

The last time that a head of state from Europe's largest economy was in Turkey was ten years ago, just after Ankara began the formal negotiations to join the European Union - a process still far from complete.

Merkel, along with French President Nicholas Sarkozy, has repeatedly said that Turkey should be offered a 'privileged partnership' with the EU - not full membership.

Despite this, relations between the two states are good, with Turkey's Prime Minister Recep Tayyip Erdogan attending the Germany- Turkey football match along with Merkel in Berlin in early October.

Wulff's visit is planned to encompass the whole range of bilateral relations, including the laying of a foundation stone of a German-Turkish university in Istanbul, and talks with religious leaders.

Christian leaders in Turkey complain that their religion has no official legal status, unlike Islam. Wulff is due to meet with the head of the country's Presidency of Religious Affairs (Diyanet), Ali Bardakoglu.

The issue of the treatment of minorities affects not just Wulff's visit, but in fact the entire EU negotiations, a fact that frustrates the political elite.

'The negotiation process is constantly being interrupted by intrigues that no other entry candidate has to put up with,' says Minister for EU Affairs, Egemen Bagis.

If Wulff is to follow the opinion polls at home, he should not give his Turkish hosts any hope of a full EU membership in the foreseeable future. A poll conducted by the Bild newspaper for Monday's edition showed some 72 per cent of respondents against Turkey joining as a full member.

By Frank Rafalski and Carsten Hoffmann