Sacrificed animals meals on tables of the poor, Bardakoğlu says 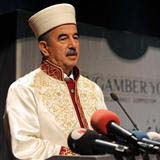 Commenting on the upcoming four-day Eid al-Adha (Feast of the Sacrifice, or Kurban Bayram in Turkish), which begins on Nov. 16, Religious Affairs Directorate head Ali Bardakoğlu said the animals sacrificed during the Eid will be meals on the tables of the poor, who rarely eat meat during the rest of the year.

Bardakoğlu said four out of five times meat consumed during the rest of the year is consumed by those with higher purchasing power and that from this perspective, those who approach Eid al-Adha with debates on animal rights should first look at the issue from the perspective of human rights.

Speaking to the Anatolia news agency, Bardakoğlu underlined that the sacrifice is a religious service on its own and that making donations in cash instead of sacrificing an animal cannot pass as having performed this service. He added that the meat of the sacrificed animal should not be sold but given to the needy.

Noting that meat is able to reach every table thanks to Eid al-Adha, Bardakoğlu said Eid is a good example of sharing. "Each year 3.5 million cattle and 9 million sheep are consumed in Turkey, and only one out of five of these are slaughtered for religious purposes," he said.

Bardakoğlu also called on all Muslims to behave in line with the spirit of the feast and to always remember that it is a religious duty. A sheep should be at least 1 year old if it is to be sacrificed, while the minimum age for cattle is 2 years old in order for them to be suitable for sacrifice, according to Islam. Sacrificing pregnant livestock is prohibited, Bardakoğlu reminded the public.

On the issue of donating livestock so that they can be sacrificed by charity organizations and later distributed to those in need, he said organizations that collect such donations should certainly sacrifice the animals and that the money they collect cannot be used for purposes other than charity, let alone for profit. "It should not be used for anything other than sacrificing livestock and delivering the meat to the needy. All the money collected should be spent on this," he asserted.

Bardakoğlu also provided some information on the directorate's Eid al-Adha campaign for Pakistan, which was recently hit by disastrous floods. Bardakoğlu said the majority of the livestock donated to the directorate will be sent to Pakistan, adding that that they have devised a plan to carry out sacrifices for Eid al-Adha in the country.

This year, the price for each sacrifice made on behalf of donors will range from TL 380-450, while sacrifices made abroad will be priced between TL 200-220.