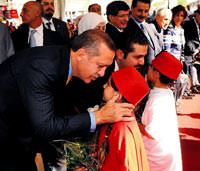 BEIRUT, LEBANON (AFP) -- Erdogan's remarks were made as he departed Beirut, the Lebanese capital, following a two-day visit. The visit strengthens the long-term alliance between Lebanon and Turkey, which currently is at an all-time low.

"Does Israel think it can enter Lebanon with the most modern aircraft and tanks to kill women and children, and destroy schools and hospitals, and then expect us to remain silent?" Erdogan asked. "We will not be silent and we will support justice by all means available to us."

Turkey has been a reliable ally of Israel in the Muslim world but the ties between the two nations have been deteriorating after Turkey opposed the Israeli Operation 'Cast Lead', which left between 1,166 and 1,417 Palestinians killed in addition to 13 Israeli deaths.

It is believed that the visits may indicate that Turkey is moving closer to the so-called resistance axis, as the European nation shares the anti-Israeli stance. Iran and Turkey are promoting unity in Lebanon as the country is on the brink of political disintegration over the Special Tribunal for Lebanon.

Erdogan also visited a village in northern Lebanon which is inhabited by Turkmen families. During his speech, he also called on Israel to apologize for its regional mistakes. In addition, the PM inspected the Turkish troops with the UN Interim Force stationed at the Israeli border.

The Prime Minister also called on the five permanent members of the United Nations Security Council to pressure Israel over its nuclear program in the same way that the international community has been dealing with Iran.