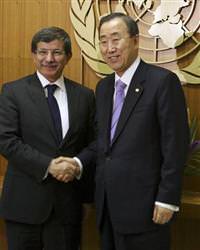 In the Meeting Ban had thanked Davutoglu for Turkey's constructive and resolute efforts at the Security Council during its two-year non-permanent membership.

Sources cited Ban as telling the Turkish foreign minister that the UN chief would participate in UN's Least Developed Countries Conference in Istanbul in May.

On the agenda of the meeting between Ban and Turkish Forein Minister Davutoglu were Cyprus issue, Iraq, the Middle East peace process, Iran's nuclear program, referendum in Sudan, and an ongoing UN investigation over Israel's deadly raid on a Gaza-bound aid flotilla last May.

After his meeting with the UN chief, Davutoglu attended a dinner reception hosted by Greece's Permanent representative to the UN Anastassis Mitsialis.