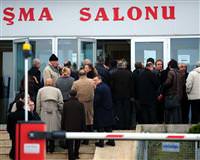 Amid tight security the officers filed into a courtroom near Istanbul to answer accusations over an alleged 2003 conspiracy to destabilise Prime Minister Tayyip Erdogan's AK Party government and pave the way for military intervention.

The "Operation Sledgehammer" case, which included plans to bomb historic mosques and provoke conflict with Greece, reflects a lingering mistrust between the military and a ruling party that critics say retains Islamist leanings.

The defendants, important figures in NATO's second biggest army, deny any conspiracy and say scenarios discussed at a military seminar seven years ago were a war game exercise.

"When the time comes in court for the defence I will say that this case does not have a legitimate basis," General Cetin Dogan, the former head of Turkey's prestigious First Army, told broadcaster CNN Turk outside the court in Silivri, west of Istanbul.

"I am very relaxed. I am on the right side and have never been on illegitimate ground. I am not a man of coups," he said before entering the court, which is located in a prison complex.

Retired commanders of the navy and air force, Admiral Ozden Ornek and General Halil Ibrahim Firtina, were also among the 196 defendants. All but nine defendants attended the first hearing, which was not expected to go beyond confirming identities.

The trial comes a little over six months before a parliamentary election. Erdogan, popular with conservative Muslims, is widely expected to win a third consecutive term but the case will add to a series of domestic and foreign policy challenges.

Since coming to power, the AK Party government has used reforms designed to boost Turkey's European Union membership bid as a means to reining in the authority of an army that has toppled four civilian governments since 1960.

Erdogan has also driven an economic transformation which has shifted power to a new emerging business class and away from old elites made up of generals, judges and educators devoted to the secular principles of the republic's founder, Mustafa Kemal Ataturk.

Concerns about political tensions are for now unlikely to unsettle investors, well-used to Turkey's turbulent political scene, so financial markets are not expected to move for now.

The secularist establishment has felt increasingly embattled, although the AK Party denies impinging on lifestyles and casts itself as a Muslim version of Europe's Christian Democrat parties.

Three-quarters of the defendants in the mass trial are serving officers, and the case could drag on for years.

"For as long as the trial continues, there will be a high pressured environment for relations between the government and the Turkish armed forces," said Sedat Ergin, columnist with the Hurriyet daily.

Against this background, maintaining morale in the officer corps will be a major challenge for new armed forces chief General Isik Kosaner, a staunch secularist.

Hundreds of defendants, many perceived as hardline secularists, are already on trial at the same court in connection with a series of alleged coup plots allegedly orchestrated by the shadowy Ergenekon network.

The officers in the Sledgehammer case, who are not being held in custody, face jail sentences of 15-20 years if found guilty of plotting to destabilise the government.

Judicial authorities also reassigned two judges who were expected to hear the Sledgehammer case to other courts just two days ahead of the trial. The defence criticised the move as it gave the new judges little time become familiarised with the 1,000-page indictment.