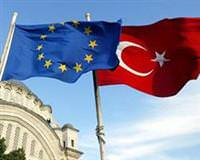 European Union governments sent a mixed message of praise and criticism toward Turkey and its EU accession effort on Tuesday, underlining persistent divisions in the bloc over Ankara's membership prospects.

During an annual debate on enlargement held by EU states in Brussels, the bloc expressed "deep regret" about Turkey's failure to patch up relations with EU member Cyprus and pressed Ankara to show improvement "without further delay".

"Negotiations (with Turkey) have reached a more demanding stage," ministers of foreign and European affairs said in a statement after the meeting.

Addressing hopefuls in the western Balkans, EU ministers gave assurances to Croatia that the end of its entry talks was "within reach", adding to hopes the former Yugoslav republic could join in the next two to four years. But they made it clear other aspiring countries face steep challenges.

Britain, Finland, Sweden and Italy had pushed the EU last week to give stronger backing to Turkey's entry efforts and accelerate growth of the bloc, troubled by concerns among many EU states over the cost at a time of Europe's economic woes.

But the push ran into long-standing opposition from Cyprus, with Nicosia pressing on Tuesday for a more critical stance to reflect a dispute over the northern part of the divided Mediterranean island which only Ankara recognises as a state.

France and Germany are also hesitant about Turkish entry.

EU governments face a dilemma in how to balance reluctance among the bloc's voters toward further enlargement -- on the rise since it admitted 12 countries in the last decade -- with concerns over keeping accession hopefuls engaged in the process.

Foreign ministers of Britain, Finland, Sweden and Italy argued in an article in the International Herald Tribune that faster accession would bolster Turkey's democratic reforms and help revive the EU's economy:

"The doubts over admitting a large and self-confident nation are as explicit now as they were when Britain once applied -- facing strong opposition from older members of the club."

"Concerns are legitimate - but the counter-argument is clear: New members can help Europe return to economic dynamism."

However, talks between the European Commission and Turkey in the past two months produced no progress in resolving the Cyprus row. Turkey has also failed to start talks in a single new policy area for six months, although Belgium's foreign minister Steven Vanackere said on Tuesday a new "chapter", one of 35 needed to complete entry talks, could be opened in early 2011.

Cyprus wants Turkey to open up its ports and airports to Greek Cypriot traffic. Turkey refuses to do so until the EU ends the isolation of the north, which broke away in 1974 after a Turkish invasion triggered by a Greek-inspired coup.