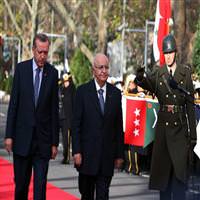 Turkey's prime minister on Tuesday blamed Israeli "intransigence" for the deadlock in Mideast peace talks and called on the international community to work toward breaking the impasse.

Recep Tayyip Erdogan was addressing reporters in a joint news conference with Prime Minister Naji al-Otari of Syria after ministers from both countries held a meeting to build on already thriving co-operation.

"We are concerned that U.S. efforts to start direct talks between Israel and the Palestinians were left unsolved due to Israel's intransigence," Erdogan said. "Under these conditions, the international community and countries of the region must engage in more intense efforts for a peace opening."

U.S. officials said earlier this month that they had abandoned efforts to get Israel to reinstate a settlement construction slowdown in the West Bank, concluding that was not the best way to restart the talks. The Palestinians have said they would not resume negotiations without construction curbs.

Earlier Tuesday, ministers from Turkey and Syria signed several co-operation agreements, including one to combat terrorism, and al-Otari pledged continued support for Turkey in its fight against Kurdish rebels, some of whom are based across the border on Syrian territory.

Tensions between Turkey and Syria ran high in the 1980s and 1990s when Turkey accused Syria of sheltering autonomy-seeking Kurdish rebels, which Turkey considers to be terrorists.

"Our final goal is for the peace and friendship to expand to the whole region wave by wave," Erdogan said.