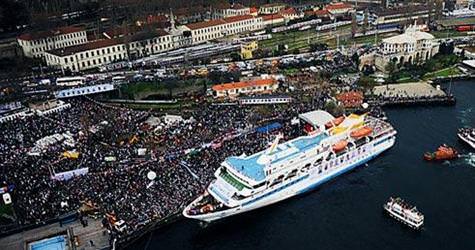 Thousands of pro-Palestinian activists on Sunday welcomed back to Istanbul the ship that was the scene of bloodshed during an Israeli raid on a Gaza-bound aid flotilla in May. Activists meanwhile, promised to send more ships in an effort to break the Gaza blockade.

Hundreds of balloons were released as the ship, Mavi Marmara, sailed into Istanbul's Sarayburnu port, following repairs at a port on Turkey's Mediterranean coast.

The activists, mostly members of pro-Islamic groups, waved Palestinian and Turkish flags and chanted "down with Israel" and "Allah is great" as they greeted the vessel. Protesters also boarded boats to welcome the approaching ship, which was adorned with a poster of the nine activists from Turkey who were killed during the raid.

"We promise that we will go again and again to Gaza, until Gaza and Palestine are free," Israeli-Swedish activist Dror Elimelech Feiler told the crowd.

The ship was part of an international flotilla carrying supplies to Gaza in a campaign to breach the blockade on Gaza when Israeli troops intercepted the convoy. Eight Turks and an American-Turkish teenager were killed in the violence that erupted on board the Mavi Marmara.

The incident aggravated relations between former allies Turkey and Israel that were already tense over Turkish criticism of Israel's conflict with Palestinians. Turkey recalled its ambassador and pushed for international condemnation of Israel.

Turkey has since said it wants improved ties with Israel, but is not backtracking from its demands that Israel apologize for the raid and compensate victims before relations can return to normal.

High-level Turkish and Israeli officials met in Geneva earlier this month to try to mend fences, after Turkey sent aircraft and firefighters to help Israel battle a wildfire. But they failed to agree on terms.

Israel insists commandos opened fire in self-defence after meeting what they called unexpected resistance when they boarded the Mavi Marmara. Israel wants Turkey to return its ambassador to Tel Aviv and to drop the flotilla incident from the international agenda.

Speaking at the welcoming ceremony, Ahmet Dogan, the father of the American-Turkish teenager who died, Furkan Dogan, said the victims' families wanted more than an apology and compensation from Israel.

"If they want to ease the pain of the families of the martyrs, the embargo and blockade (of Gaza) must be lifted," Dogan said. "All those in the Israeli (military) command chain involved in the incident must be punished."

After the raid, Israel significantly eased import restrictions over land, and announced it would permit increased exports from Gaza.