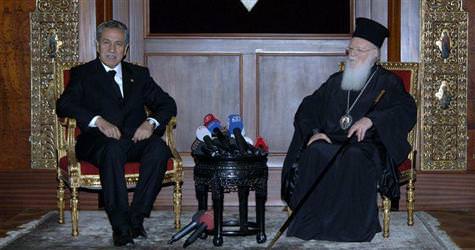 A senior Cabinet minister on Monday became the highest-level Turkish official to visit the Greek Orthodox Patriarchate in more than half a century, symbolizing government pledges to address problems of religious minorities and strengthen the country's European Union membership bid.

Turkey for decades has ignored demands of the Patriarchate due to mistrust stemming from rivalry with Greece. But Deputy Prime Minister Bulent Arinc's visit coincided with government promises to consider reopening a seminary that trained generations of Ecumenical Patriarchs and returning properties confiscated by the state to Christian and Jewish minority foundations.

Turkey, a predominantly Muslim country, is striving to join the European Union, but faces criticism that it discriminates against non-Muslim citizens and Alevis, a Muslim minority sect. The European Commission's 2010 progress report cited restrictions on the training of clergy and other religious practices. The Islamic-rooted government seeks to promote religious freedom, loosening tight state controls that are a legacy of Turkey's secular founder, Mustafa Kemal Ataturk.

Arinc entered the Patriarchate from a side gate and passed by a decorated Christmas tree in the rain-washed marble courtyard before sitting under an icon of Jesus Christ together with Patriarch Bartholomew I, the spiritual leader of the world's Orthodox Christians, Dogan news agency video showed.

The main entrance remains welded shut out of respect for Patriarch Gregory V, who was accused of conspiring against the Ottoman Empire and was hanged from it in 1821. Istanbul, formerly Constantinople, was the capital of Christian Byzantium before falling to Muslim Turkish forces in 1453.

Two ministers visited the patriarchate in the past two years, but Arinc is the highest ranking government official to visit since Prime Minister Adnan Menderes in 1952. Menderes was later hanged after a military coup.

"Today is a very happy day for us," said Bartholomew. "It has strengthened our hopes."

Prime Minister Recep Tayyip Erdogan's government recently "surprised" the Patriarchate by granting Turkish citizenship to 14 senior clerics from North and South America as well as Hong Kong, South Korea and Crete and separately returned control of a 19th-century orphanage to the Patriarchate, said Father Dositheos Anagnostopulos, a spokesman for the Patriarchate.

About eight more clerics were still waiting for Turkish citizenship, a requirement for anyone who succeeds the elderly Bartholomew.

The patriarch had complained to Erdogan in August that the closure of the Halki seminary in 1971 prevented raising new leaders for the church and made it difficult for the dwindling Greek community of several thousand to produce any candidates.

"It is our duty to meet the just demands of our citizens who have lived in this country for centuries," Arinc said. "We will try to meet them from a legal point of view."

He stressed that no decision has been made yet but the government was "determined" to give rights to minorities.

Bartholomew hailed the government's reforms as "openings for democracy and further westernization of Turkey" but said the measures fell short of expectations.

"They are not 100 per cent satisfactory. We expect new and more progressive steps on these issues," Bartholomew said. "Of course, we expect the reopening of the seminary. It is the 40th anniversary of its closure this year."

The Halki Theological School on Heybeliada Island, near Istanbul, was closed to new students in 1971 under a law that put religious and military training under state control. The school closed its doors in 1985, when the last five students graduated.

"The visit by the deputy prime minister to our Patriarchate has both excited us and raised our hopes for a solution to our problems," said Laki Vingas, a member of the Greek Orthodox community.