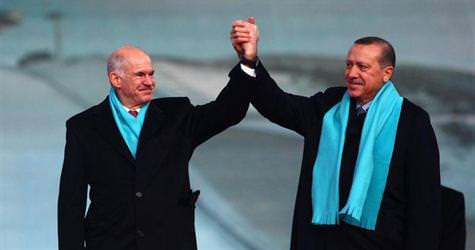 As the two leaders of Greece and Turkey met in Erzurum to deliver messages of camaraderie in below 15 degree weather, Papandreou’s reference to an ‘occupation in Cyprus’ brought in an even colder wind to blow through. Erdoğan’s response was harsh as the Turkish PM responded, “Don’t try our patience.

Peace was triumphant in the evening's press meeting as ties were visibly strengthened.
George Papandreou, the Prime Minister of Greece, the first hosts to the Olympics in 776 BC, joined Turkish Prime Minster Tayyip Erdoğan for yesterday's opening of the World University Winter Games in Erzurum.

Prior to the opening, the two leaders spent three and a half hours sitting by a fireplace, while they laid proposals for peace in the Aegean on the table. Afterwards, as the temperatures dropped to negative 15 degrees, the two premiers released a joint statement. "We want peace."
Papandreou's words spoken in the afternoon at the Third Ambassador's Conference however, resulted in dropping temperatures further. According to Papandreou, the occupying status of the Turkish military in Cyprus will not be considered acceptable by either the EU or the UN. Erdoğan responded to the statement on the same platform, "You will come, and sit at the table. If we are going to reach a solution, then we will do so based on principles that are mutually beneficial. We extend on olive branch to the Greek Cypriots with the same sincerity as we did with Yerevan."
After witnessing Erdoğan's decisive stance regarding reaching peace, it was as if Papandreou's statements in the evening's joint press conference were a form of an apology, as he stated;"I was obliged to mention the concerns of my people."

OLYMPIC SUPPORT
Yesterday's meeting between the two neighboring leaders, which will be an example for the world due to Papandreou's words, began at breakfast. Minister Erdoğan was forced to refrain from attending the Friday prayer ceremony at the Lalapaşa Mosque, when the meeting went over. The two leaders discussed increasing measures to be taken at the borders to prevent the flow of illegal immigrants, reconnaissance deliberations and economic collaboration. The leaders reached a decision to increase joint efforts to establish measures to prevent the illegal border crossing of immigrants and to bring an end in 2011 to reconnaissance deliberations which began in 2002.
The two leaders later attended the opening of the Cemal Gürsel Stadium. Papandreou addressed the crowd by stating in Turkish, "Sevgili Erzurumlular" (Dear Erzurumites). He not only began his speech in Turkish, but he also ended it in Turkish, with words offering hope. "We are making courageous efforts. As the Turkish and Greek governments, we are extending efforts for peace and camaraderie. We feel both honor and pride due to the history of our countries. We want to demolish the biases of the past together. We have already made progress politically, economically and in our areas of commercial cooperation. These developments, are in honor of the Erdoğan Government and all of the strides they have taken for these efforts. Greece will forever offer our support for Turkey to host the 2020 Olympics."
"SEA OF FRIENDSHIP"
Prime Minister Erdoğan, who was enthusiastically welcomed by those in Erzurum, delivered a series of messages to both the Turkish and Greek public alike, in an address which was frequently interrupted with bursts of applause. "We are extending intensive efforts to transform the Aegean Sea into one of peace and friendship, and thank goodness we are witnessing results. Starting at the beginning of the day, I held a very productive meeting with my Greek counterpart George. In the middle of winter, here in Erzurum, we have once again strengthened what was very warm communication. We want a world in which peace, love and respect are dominant. That is why we are headed side by side to a bright tomorrow."