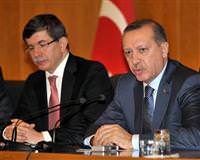 In plunging headlong into trying to help resolve some of the toughest political conundrums in the Middle East, Turkey may be wondering whether it has taken on more than it can handle.

In the space of a week, Turkey has stepped in to play a role in Lebanon's political crisis and Iran's nuclear row with the West and come up empty-handed in both.

Expectations in both cases were low and the prospects for any breakthrough tough, but analysts say Turkey's fledgling image as mediator may be at risk.

"We don't have a single tangible mediation success story so there is a risk that Turkey is seen as overstretching itself," said Semih Idiz, a veteran Turkish foreign policy analyst.

"Turkey's ambition to be a wise fireman in the Middle East is proving to be very difficult because of the region's slippery ground," he said.

Muslim Turkey has become a bigger player in the Middle East emboldened by its booming economy and a more Islamic identity under Prime Minister Tayyip Erdogan's AK Party,

Turkish firms are expanding their presence in the region and Turkish diplomats shuttle between Tehran, Damascus, Washington and European capitals.

It is a profound shift. Large swathes of the Middle East had been dominions of the Ottoman Empire, but after its collapse in 1923 the Turkish Republic founded by Kemal Ataturk turned westwards in a search for modernity, and old ties to East were left to wither.

Turkey's re-engagement has added a fresh dynamic to a region where Iran, Saudi Arabia and Egypt have held most sway.

Erdogan reaffirmed his credentials with the Arab world most recently by condemning Israel over its Palestinian policies and its deadly raid on a Turkish-led aid convoy, turning him into a hero in the Arab street.

For Ian Lesser, from the German Marshall Fund think tank, the cost of Turkey's over-active foreign policy could be losing sight of what have been its long-term goals.

Turkey's number one priority has been to secure membership of the European Union, but enthusiasm for the bid has cooled amid Ankara's complaints Europeans are putting up unfair obstacles.

Ties with vital ally the United States -- which sees Turkey as a Muslim democracy that could become a role model in the region -- have also come under some strain.

"The activism is there, but the priorities are not. There is a risk that some of Turkey's big targets are getting lost," Lesser said.

Some analysts such as Henri Barkey, a Turkey expert at the Carnegie Endowment for International Peace, say Ankara may have an overly ambitious assessment of what it is capable of achieving to resolve intractable issues such as Iran's conflict with the West.

"Turkey has a lot more power than it had before, but much less than it thinks. The glass has some water in it but there are more failure than successes," he said.

Davutoglu, the brain behind Turkey's "zero-problems with neighbors" policy, argues it is in Turkey's national and economic interest to try to solve long festering disputes in its backyard.

Ankara has hosted indirect talks between arch-enemies Syria and Israel, and has used its soft power to advance pro-U.S. interests from Baghdad to Kabul.

But Idiz said Turkey, a member of NATO, may run the risk of becoming isolated if it sides too much with Iran, for example. Its decision to vote against the latest round of U.N. sanctions on Iran did not go down well among Western allies.

Some analysts say Turkey may be getting used by Iran, arguing the country's hardline leadership is promoting the country's nuclear advances and its dispute with the so-called P5+1 group -- the United States, Britain, France, Russia, China and Germany -- to rally nationalist support at home.

Iran may be taking advantage of Turkey's goodwill to drag out a diplomatic process that is virtually going round in circles.