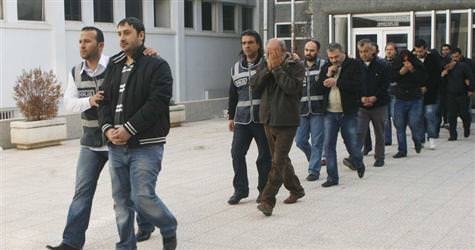 A criminal organization based in Antalya provided tapping services in exchange for 1,500 TL, where customers could listen in on their spouses or lovers. It was recently revealed that a man, who killed his 50-year-old wife for cheating on him, had taken advantage of these ‘services.’

A criminal organization which provided 'bugging' services for spouses has been brought down in Antalya. A tip was received by the Antalya Public Prosecutor's office about a year ago, in which information was relayed that a 'gang' was providing illegal tapping services. A court warrant was issued to track down the group claimed to be conducting illegal tapping. After a year of both technical and physical tracking, police found that the organization had spread throughout 15 different provinces. A simultaneous raid was conducted on a series of previously determined locations yesterday. During the operation, deemed "The Third Ear", ten arrests were made including organization leader Ercan Ö. and a retired sergeant. The organization was detected to have infiltrated a number of official establishments and provided telephone tapping as well as bugged locations in order to listen in on conversations in exchange for a fee and was primarily involved in dealing with suspicious spouses.
SERVICES FOR SUSPICIOUS SPOUSES
According to the investigation, the organization charged 1,500 TL for spouses to listen in on their partners or lovers. For 2,500 TL, a spy program and bugging devices were sold and physical tracking services were provided. Forty-four individuals, claimed to have used the organization's services, were arrested in 15 different provinces. According to findings, there were 50 victims of the organization's activities. Supposedly there were a number of important businessmen amongst those who commissioned the organization to listen in for them. Amongst those who used the organization's services, was 52-year-old Faik Erdem Ferimaz, whom on June 30th, 2010 murdered his 50-year-old wife Nurhayat Ferimez in Tekirdağ, by strangling her with his own bare hands.