Erdoğan to Gaddafi: Listen to the people 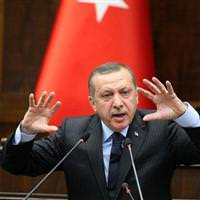 Prime Minister Erdoğan states that without harming Turkey’s interests, he listens to the calls of the friends and brothers of the public.

Prime Minister Tayyip Erdoğan voiced out to Gaddafi, the leader of Libya for the past 42 years, as the public uprising reaches unprecedented levels. "Gaddafi should listen to the people," states Erdoğan, "Libya is more than just a friend it is a brother state. For a brother to shed blood from their own brothers is our own suffering. Libya must heed the public's demand for democratic rights. It is not possible for any administration who perceives their own public as a threat to stay in power long. Especially if they administer violence on their public, no administration can protect the path they are on."
'WE WILL DO WHATEVER NECESSARY'
Addressing the Libya issue during an AK Party Group meeting, Erdoğan went on to state, "While the situation in Libya is this sensitive it would be irresponsible, in poor quality and opportunist to attempt to try to achieve political gain.
It is very interesting that as soon as the events transpired in Libya, certain people dropped all of their work and are making even the smallest of accounts and turning it into an issue of an award. Diplomacy cannot be done by solely devising statements and addressing the media," states Erdoğan.
''The Turkish republic will evaluate all that needs to be done in such a situation, we will do whatever necessary and we already do. We will not make any concessions from our principles nor will we close our ears to the cries of our brotherhood public nor will we harm Turkey's interests. It is extremely wrong to turn such a sensitive and important issue into internal politics and would only hurt our national interests."
Mentioning that discourse has aroused regarding the need to return the award for human rights granted to Erdoğan by Libya, the premier states, "What is the award garnished to me by Libya, why was it given to me? It was for our sensitivity to the Palestinian struggle, and our struggle to help the Palestinian people.
This award is the manifestation of the Middle Eastern public. While we struggle night and day to secure the evacuation of our citizens in Libya, for some people to be so irresponsible as to try to politicize something so trivial is extremely dangerous."