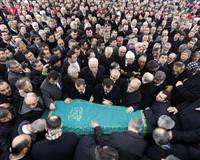 The former Prime Minister of the Turkish Republic’s 54th government Necmettin Erbakan will be laid to rest today in Istanbul in a funeral ceremony anticipated to draw hundreds of thousands.

A GRAND GOODBYE
Erdoğan has postponed a scheduled trip to Brussels today in order to attend Erbakan's funeral ceremony, which is anticipated to bring the entire state's leaders out in joined support. Officials from Erbakan's Felicity Party have announced they expect the numbers of those to attend the ceremony today to surpass one million.
HIS GRAVE IS READY
Erbakan's funeral ceremony will be held after the noon prayer in Istanbul's Fatih Mosque. After the ceremony, his casket will be taken to the Merkez Efendi Cemetery via Vatan Street. Necmettin Erbakan's grave has been prepared adjacent to his wife's.
ERBAKAN'S WILL TO BE RELEASED NEXT WEEK
According to sources, Necmettin Erbakan prepared a will with his lawyer after he was admitted to the hospital. The contents of the will be announced by Erbakan's family and attorneys next week.
National Vision will continue…
Erbakan's son Fatih Erbakan announced that the National Vision Movement as started by Erbakan will continue on.
ISLAMIC LEADERS ARE ON THEIR WAY
A number of very significant leaders from the Islamic world, including Tunisia's opposition leader Ghannouchi are headed for Istanbul to attend Erbakan's funeral.
ISTANBUL ON STANDSTILL FOR ERBAKAN'S WAKE
Ten thousand police will be on duty today in Istanbul and a number of roads will be closed to traffic for Erbakan's funeral ceremony. Amongst the streets that were shut down as of 07:00 am this morning are 10. Yıl, Fevzi Paşa, Macar Kardeşler, Halıcılar, Akdeniz Caddesi Vatan Caddesi and Adnan Menderes Boulevard.