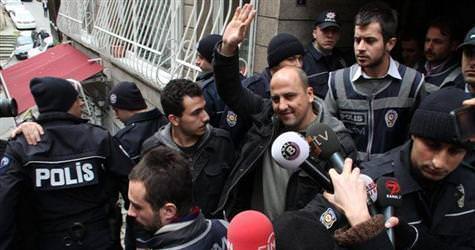 Journalists in Turkey marched in protest on Friday after police arrested 10 reporters and writers, detentions that prompted the European Commission to warn the EU candidate country's over its democratic credentials.

Thursday's arrests were ordered as part of a widening conspiracy investigation that government critics say is being used to hound them.
Two weeks ago three other journalists were jailed pending trial on charges of ties to a murky ultra-nationalist group known as Ergenekon, alleged to have plotted to overthrow the ruling AK Party government.
"The European Commission is following with concern the recent police actions against journalists," EU Enlargement Commissioner Stefan Fuele said in a statement late on Thursday.
Several thousand people joined a protest march organized by journalists through central Istanbul on Friday, demanding the release of their colleagues. One placard indicated there were 61 journalists who should be freed.
"The free press cannot be silenced," marchers chanted before switching to, "Damn the AKP dictatorship".
The protest in the capital Ankara, was smaller, with about 500 mostly journalists protesting at a lack of media freedom under Prime Minister Tayyip Erdogan's government. Some bound their mouths with black tape as they bore aloft placards.
In its progress report on EU-membership candidate Turkey, the European Commission had highlighted the high number of court cases against journalists. Many reporters are being investigated over their coverage of alleged plots to topple the government.