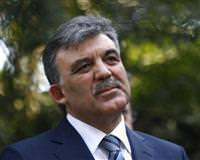 Turkey's President Abdullah Gul said on Thursday Egypt's military rulers should allow a quick and transparent transition to meet the demands for democracy from the Egyptian people.

"The transition process is the best way to meet the expectations of the people," Gul told a group of journalists aboard his plane before arriving in Cairo, where he was expected to hold talks with military leaders and political groups.
"The transition must be transparent and open and must be satisfactory. If the transition period does not meet the expectations of the people it won't be successful," Gul said.
"This should not take too long a time."
Gul arrived in Cairo as Egypt's Prime Minister Ahmed Shafiq resigned and a former transport minister was picked to appoint a new government, after pro-democracy activists demanded a purge of Hosni Mubarak's old guard from the cabinet.
Military rulers said they had accepted the resignation of Shafiq and appointed Essam Sharaf in this place.
Gul, who was accompanied by Turkey's Foreign Minister Ahmet
Davutoglu, was expected to meet Mohamed Hussein Tantawi, head of the military council that took control in Egypt.
He was also due to hold talks with political reform campaigner Mohamed ElBaradei and Arab League Secretary General Amr Moussa, who has yet to decide whether to run for the Egyptian presidency.
Turkey, a relatively stable and vibrant economy, is often held up in the West as a model for democracy in Muslim nations.