“I never would count all of the stars” 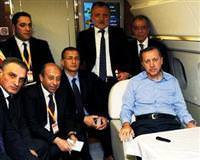 This was Erdoğan’s response when journalists asked him to predict the results of the upcoming June12th election while en route from his return from London.

Prime Minister Erdoğan offered an assessment of the agenda in both internal and foreign affairs to the journalists that accompanied him on his trip to London. When asked if he knew the results of surveys conducted prior to the election, Erdoğan stated; "Kılıçdaroğlu talks about me providing voter rates. I don't like to give figures. I never would count the stars."
I GET EMOTIONAL WHEN I LOOK AT THE SOUTHEAST
Erdoğan also evaluated the reactions to his trip to Northern Iraq. "Who was uncomfortable by my going there? BDP… why? It is those who are uncomfortable with investments in Hakkari and Diyarbakir. They used to say 'the state never comes here' and now they can no longer say that. When I witness all of the developments in Diyarbakir I get emotional. We have drilled through a mountain and build a tunnel.
IMMIGRATION FROM SYRIA COULD BE AN ISSUE
Erdoğan also touched upon the developments in Syria and stated, "I don't want to be apprehensive. However, these are our neighbors we share the longest border with. Family issues are always a separate matter. In Hatay, Aleppo and Kamisli there are a number of serious marriages. My wish is for there to be no migration if there is that could be an issue."