Istanbul and the Southeast transformed into a battleground 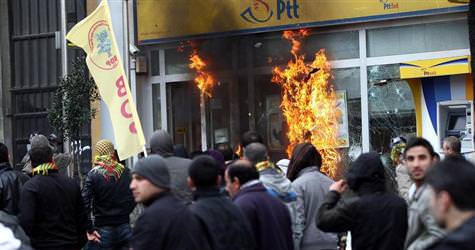 Supporters of the Peace and Democracy Party, or BDP, staged a number of demonstrations yesterday in Istanbul and in cities in the Southeast to protest the Higher Election Board or YSK, ruling to ban certain independent candidates from running in the upcoming election.

ISTANBUL: Thousands of BDP supporters staged a sit-in closing off traffic along the entrance to İstiklal Street. Later, the group marched towards the metro stop in Aksaray where they bombarded three fire trucks and an ambulance. Two Molotov Cocktails were thrown at the Unkapanı Bridge while demonstrators also stoned İETT buses. One demonstrator took down the Turkish flag at the Aksaray City Police (Zabıta) Department and put up a BDP flag in its place. The windows of the Post Office Cargo Building were also smashed in.
DİYARBAKIR: In Diyarbakır, a group which had gathered to protest the ongoing case against the PKK's urban wing, the Kurdish Communities Union, or KCK, engaged in conflict with police forces. In addition, hundreds of masked demonstrators raided the Metropolitan Municipality building and stoning the windows and doors.
VAN: In Van, demonstrators threw Molotov Cocktails at business locations which displayed Turkish flags hanging in their windows. Two officers were wounded when a police vehicle crashed into a barricade set up by demonstrators. Upon receiving a tip that a number of demonstrators were hiding out in the Hz. Ömer Mosque, police detained ten people. In demonstrations that went on throughout the day, 20 people were wounded, 12 of which were police officers and 102 were taken into custody. While nine people were injured in Hakkari, one of which is in critical condition, a significant number of people in Nusaybin and Adana were also admitted to hospitals for injuries. Demonstrations continued into the late night hours and according to the news obtained are still ongoing in Diyarbakır.