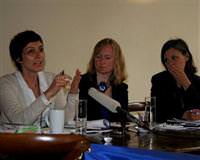 Turkish women have been left vulnerable to repeated abuse because of poor enforcement of domestic violence laws, Human Rights Watch said on Wednesday.

European Union-membership candidate Turkey introduced legislation in 1998 and 2007 allowing victims to obtain protection orders, but in many cases women are dismissed by police or sent home, the group said in a report.

A loophole in the law can also exclude divorced women and those who have had a religious rather than a registered state marriage, it added.

"The extreme brutality that family members inflict on women and girls is bad enough, but it is even worse to know that a woman who finds the courage to escape and ask for protection might be insulted and sent right back to her abuser," said Gauri van Gulik, author of the report.

The report recorded cases of rape, severe beating and imprisonment based on interviews with 40 women across Turkey.

In one case, a woman raped and beaten by her husband over many years was repeatedly turned away by police, said the report.


When she fled to a shelter, police told her husband her whereabouts and staff at the shelter encouraged her to reconcile with him, it added.

The report comes ahead of the adoption by the Council of Europe, currently chaired by Turkey, of a convention against domestic violence. The convention is due to be signed in Istanbul on May 11.

A 2009 survey by Turkey's Hacettepe university found around 42 percent of women aged over 15, and 47 percent of rural women, had experienced violence at the hands of a husband or partner at some point in their lives. Only 8 percent of them sought help.

Human Rights Watch urged Turkey to ensure its own laws met the convention, and to provide more shelters and better training for police.

Fatma Sahin, a member of parliament for the southeastern city of Gaziantep, has proposed an amendment to the law which would extend cover to women who are in relationships but not
married and provide financial support to those under protection.