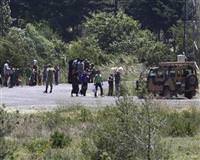 More than 3,000 Syrians have fled into Turkey to escape a military crackdown and authorities are preparing to open a third camp to shelter thousands more, a spokesman for the U.N. refugee agency said on Friday.

New arrivals mounted as the Syrian army swept into a town near the border where clashes raged earlier in the week and began to arrest what state television described as armed opponents.

He said more than 3,000 people had registered with the Turkish government and he expected many more to come.

Turkish officials are considering drastic contingency plans including possibly establishing a buffer zone if hundreds of thousands want to seek refuge in Turkey," it reported.

Turkish Prime Minister Tayyip Erdoğan reiterated on Thursday that Turkey would keep its gates open to people from Syria, where President Bashar al-Assad has resorted to military force as he tries to crush a popular uprising.

Erdoğan said Damascus was taking the refugee issue "very lightly" and Ankara could not defend Syria's "inhumane" response to the unrest.

Residents fled Jisr al-Shughour, a town of 50,000 near the Turkish border, in fear of government retribution after the Syrian government said armed gangs killed more than 120 security personnel there earlier this week.

Rights campaigners said the fighting was between loyalist and mutinous soldiers and that scores of civilians were killed.

"We can't close our door to those people who run away for their lives, but how long is it going to be like this?" Erdoğan told a Turkish television station in comments reported by state-run Anatolian news agency.

"We, as Turkey, cannot stand up for Syria in the face of all this. We still have relatives there," Erdoğan said.

The Red Crescent has opened two camps to deal with the influx and a total of 2,792 people are lodged there, said UNHCR spokesman Corabatir.

He said the Red Crescent was working on setting up another camp north of Altinozu in Hatay province, with 1,000 tents and a capacity to host 5,000 people.

"It's Friday so we're afraid the number of people fleeing may increase, that's the general pattern in Middle East uprisings," he added, referring to protests and accompanying crackdowns which have taken place after Muslim Friday prayers.

At the Yayladağı refugee camp, set in a picturesque valley just north of the Syrian border, children played football while families sat talking under trees.

Police kept journalists away from the tent camp, set up by Turkey's Red Crescent five weeks ago on the grounds of a disused tobacco factory.

Turkey has had to cope with large influxes of refugees in the past. Some 460,000 fled northern Iraq at the time of the 1991 Gulf War.

Turkey made preparations for a buffer zone at the time of the 2003 Iraq war but only around 10,000 came on that occasion.