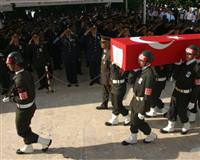 PKK terrorists ambushed a military convoy in eastern Turkey late Saturday, killing three soldiers, one a lieutenant. There is speculation that information may have been leaked to the PKK regarding the troop’s whereabouts in Şırnak.

The ambush took place in the evening hours Saturday in the southeastern province of Şırnak when soldiers patrolling a road were attacked by PKK terrorists.
Security resources believe a tip may have been made to the PKK terrorist organization regarding the presence of soldiers in the region prior to the attack. Sources state that the area is extremely dark and an impossible location to detect the presence of terrorists, thereby solidifying the speculation there may have been an intelligence breach leading to the attack.
In June, jailed PKK leader Abdullah Öcalan sent word through his lawyers that he had agreed with Turkish officials to set up a "peace council" aimed at ending a 27-year conflict in which 40,000 people have died.
Terrorist activity in the impoverished southeast continues, however.