Assad’s seven drops that have filled the cup of patience 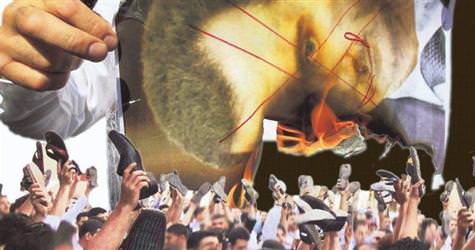 SABAH has acquired details on Turkey’s state summit and farewell messages to Syria. It turns out there were seven specific items in recent intelligence reports which led to President Gül and Prime Minister Erdoğan’s harsh statements regarding Syria.

SABAH has unveiled the behind-the-curtains details that spurred President Abdullah Gül to express a loss of confidence in the Syria administration and Prime Minister Recep Tayyip Erdoğan to state that no regime that kills its own people can remain in power, statements that are being considered as a farewell warning to neighboring Syria. In response, Syrian State leader Bashar al-Assad's administration has proceeded to arrest 3,000 people within one week's time. Amongst those arrested are Syrians with Turkish relations. They are being taken to remote prisons and are supposedly being subjected to intense torture. The following are the seven items that have supposedly spurred Ankara to finally lose patience.
1) DEATH TOLL: According to unofficial figures, the number of people killed in massacres by Assad's forces has reached 5,000.
2) WOMEN RAPED: Documents have recorded incidents of rape. Twenty women have openly detailed accounts of the violence they had to endure.
3) THREE THOUSAND ARRESTED: Arrests are now widespread throughout the country, and prisoners are being tortured. A significant number of Syrians with Turkish relatives were amongst the 3,000 arrests made in the past ten days.
4) SYSTEMATIC EXCLUSION: Those who do not openly support the regime are one by one being removed from their governmental positions.
5) Maher Assad has referred to Turkey as an enemy. Television broadcasts that are negative towards Turkey are being broadcasted regularly.
6) INCENTIVE FOR WHISTLEBLOWING: Whistle blowing and informants have become rampant throughout the country. Snitches whom inform on opposition forces are receiving financial compensation.
7) THE COUNTRY IS AN OPEN PENITENTIARY: In all cities, and especially Damascus satellite dishes are being removed and passports cancelled.