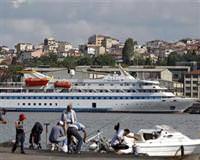 Erdoğan said on Thursday it would escort aid ships to Gaza and would not allow a repetition of last year's Israeli raid that killed nine Turks.

Raising the stakes in Turkey's row with Israel over its refusal to apologize for the killings, Prime Minister Recep Tayyip Erdoğan told Al Jazeera television that Turkey had taken steps to stop Israel from unilaterally exploiting natural resources in the Mediterranean.
"Turkish warships, in the first place, are authorized to protect our ships that carry humanitarian aid to Gaza," Erdoğan said in the interview, broadcast by Al Jazeera with an Arabic translation.
"From now on, we will not let these ships be attacked by Israel, as what happened with the Freedom Flotilla," Erdoğan said.
Referring to Erdoğan's comments, Israeli Foreign Ministry spokesman Yigal Palmor said: "This is a statement well-worth not commenting on."
Relations between Turkey and Israel, two close U.S. allies in the region, have soured since Israeli forces boarded the Gaza-bound Mavi Marmara aid ship in May 2010.
Ankara downgraded ties and vowed to boost naval patrols in the eastern Mediterranean in the escalating row. Israel says it acted legally against ships that tried to breach its blockade on the Palestinian enclave which is ruled by the Islamist Hamas group.
Israel has said it will enforce the blockade, which it says is needed to prevent arms smuggling to Hamas.
Israeli Defense Minister Ehud Barak said earlier on Thursday that Israel and Turkey will eventually mend fences rather than become foes, describing their unprecedented dispute over Gaza as "spilled milk."
Noting that an inquiry commissioned by United Nations Secretary-General Ban Ki-moon had vindicated the blockade, Barak predicted that wider Middle East upheaval would help bring Israel back together with its ex-ally.
"Ultimately this wave will pass. We recognize reality. They recognize reality," Barak told Israel Radio. "We are the two countries that are most important to the West in the region ... I am certain that we can overcome these (disagreements)."
In addition to an apology, NATO-member Turkey has demanded that Israel end the Gaza blockade. Israel says the closure is needed to keep arms from reaching Palestinian guerrillas by sea.
"A normalization or improvement in Turkey-Israel relationships shouldn't be expected unless they apologize, pay a compensation and lift an embargo on Gaza," Erdoğan said on Thursday.