Erdoğan and Obama to discuss Israel 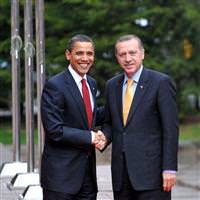 U.S. President Barack Obama will meet with Prime Minister Tayyip Erdoğan at the U.N. General Assembly in New York next week and urge him to repair relations with Israel to mend a damaging split between two key U.S. allies in the region.

White House National Security Council spokesman Ben Rhodes told reporters that Obama also anticipated a meeting with Israeli Prime Minister Benjamin Netanyahu during the president's three-day U.N. visit which starts late Monday.
"We have encouraged Israel and Turkey, two close friends of the United States, to work to bridge their differences, so we'll have an opportunity to discuss those issues," Rhodes told a news briefing.
Washington has watched with concern as Turkey's relations with Israel began to unravel in late 2008, after Erdoğan voiced outrage at an Israeli offensive against the Gaza Strip, ruled by the Palestinian Islamist Hamas group.
Turkey reacted angrily this month to Netanyahu's refusal to apologize for an Israeli raid on a Gaza-bound aid flotilla that killed nine Turkish citizens in May 2010.
After the release of a U.N. report on the flotilla, which aimed to break Israel's naval blockade of Gaza, Erdoğan's government expelled Israel's envoy, froze military cooperation and warned that the Turkish navy could escort future aid flotillas -- raising the prospect of confrontation between NATO-member Turkey and the Jewish state.
Erdoğan kept up a stream of harsh rhetoric on Israel, using a tour of Arab states this week to support a Palestinian bid for statehood at the United Nations and dismissing Israel as a spoiled client of the West.
The two countries previously had worked closely together on military cooperation and intelligence sharing, as both had sought reliable partners in a volatile neighborhood.
The meeting on the sidelines of the U.N. General Assembly is expected to give Obama and Erdoğan the chance to compare notes on Israel as well as the broader political turmoil across the Arab world and especially in Syria, Turkey's immediate neighbor.
"Turkey has been a close partner of ours on issues related to the Arab spring and I anticipate the two leaders will talk about events in Syria, where we share great concerns with the Turks about the actions of (Syrian) President (Bashar al-) Assad," Rhodes said.