Erdoğan speaks of Assad in Libya 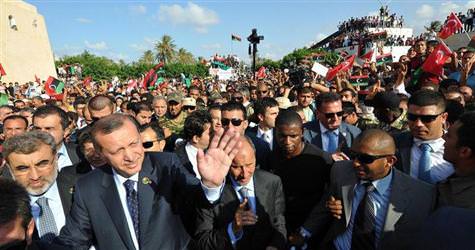 Prime Minister Tayyip Erdoğan blasted Syrian President, Bashar al-Assad, saying that those who 'inflict repression on the people will not be able to stand on their feet'.

Turkish Prime Minister Tayyip Erdoğan stepped up his rhetoric against Syrian President Bashar al-Assad on Friday, saying those in Syria who inflict repression on the people will not survive.
Erdoğan, who is visiting Libya, told a cheering crowd in Tripoli that by ousting Muammar Gaddafi the Libyan people had set an example to others seeking to throw off oppression.
"You are the ones who showed the whole world that no administration can stand in the way of the might and will of the people," Erdoğan said, as many chanted "Turkey, Turkey."
"Do not forget this: those in Syria who inflict repression on the people will not be able to stand on their feet because oppression and prosperity cannot exist together."
Erdoğan was ending a North African tour in Libya, where he hopes to reap political and economic dividends from its new rulers for Turkey's help in their struggle against Gaddafi.

His visit came a day after French President Nicolas Sarkozy and British Prime Minister David Cameron were received as heroes in the Libyan capital. French and British air power had helped rebels overrun Tripoli and put Gaddafi to flight.
Erdoğan said the age of autocracies and totalitarian regimes was over, adding: "Now, the power of the people is coming and I congratulate you on your struggle."
Erdoğan, who has repeatedly urged Assad to end a crackdown on protesters, has become increasingly critical of the Syrian leader, while stopping short of calling for his departure.
On Tuesday, Erdoğan said in Cairo that neither the Syrian people nor he believed in Assad any more.
Under Turkey's policy of "zero problems" with its neighbors, Ankara boosted its political and commercial ties with Syria, with whom it nearly went to war in the 1990s over terrorists harbored by Damascus.
Erdoğan, who is also expected to visit the eastern city of Benghazi, appealed directly to people in Sirte, a Gaddafi stronghold under attack by forces loyal to Libya's new leaders.
"From here I call out to Sirte ... come, right now, some 10,000 brothers and sisters are hungry and thirsty, embrace your brothers in Tripoli. Spilling blood does not suit us, let us come together," the Turkish leader said.