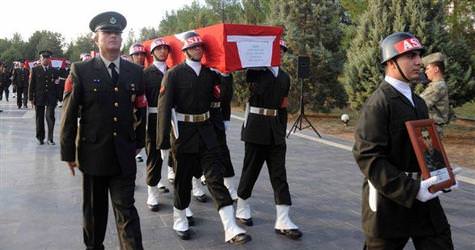 PKK terrorists infiltrated a school and used teachers and families as live shields when attacking a gendarmerie station in Siirt, resulting in the deaths of six soldiers.

Terrorists attacked the Pervari military post in the southeastern province of Siirt on Saturday, killing six soldiers and wounding 11 in a clash in which four terrorists were also killed.
PKK terrorists armed with rocket launchers attacked a patrol station in southeastern Turkey on Saturday, killing six soldiers and wounding 11 in a clash in which four terrorists were also killed, one of which was a woman.
Leading up to the attack, approximately 15 terrorists arrived to the village on a local minibus and infiltrated an elementary school located across from the military post. According to the information obtained, the terrorists entered the school and dorms located in the garden and proceeded to lock the teachers and families in one room. The terrorists then attacked the military post with long range rifles and rocket launchers form inside the school. It has also been noted that the soldiers did not immediately respond to the ambush with fire due to the potential loss of civilian life. Later however, combat ensued for four hours.
This attack was staged at a time of heightened tension between PKK terrorists and the Turkish military, which has launched air strikes and artillery raids against suspected PKK bases in northern Iraq in retaliation for a recent spate of militant attacks inside Turkey.
Earlier this month, Turkish Interior Minister Idris Naim Sahin said Turkey was preparing a possible ground operation in northern Iraq, depending on the result of talks with Iraq.
After a clear victory in a June election, Prime Minister Tayyip Erdoğan vowed to press ahead with legal reforms addressing the 12-million-strong Kurdish minority's grievances.
But a wave of PKK attacks have raised the possibility of a return to a hardline government stance in the 27-year-old fight against the rebels, with Erdoğan recently warning he had lost patience with the PKK.
.