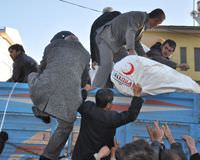 Fighting broke out among Turkish earthquake survivors on Tuesday as homeless families scrambled for tents after enduring two nights of biting cold under whatever shelter they can find.

Desperation boiled over in a crowd of around 200 people in the eastern city of Van on Tuesday. Fists flew and people shoved and pulled each other, trying to grab one of the tents which relief workers handed out from the back of a truck.

"Women in the crowd were hit and kicked as people tried to force their way through to get to the tents, while police tried to establish order.

Turkey has been showered with offers of outside help since the quake, in which 2,262 buildings collapsed, while many people are afraid to re-enter homes with cracked walls and ceilings.

At first, Ankara accepted the offers only from neighboring Iran, Bulgaria and Azerbaijan. However, a foreign ministry official said on Tuesday that it had now requested prefabricated housing and tents from more than 30 countries.

These included Israel, with which relations have been tense since Israel's killing of nine Turks aboard a flotilla bound for the Palestinian enclave of Gaza last year.

The death toll from the 7.2-magnitude quake rose to 459, with 1,352 injured, the Disaster and Emergency Administration said. The final count was likely to rise further as many people were still missing.

The urgency to find shelter has been heightened by worsening weather. Temperatures are falling to zero at night and rain poured down on Tuesday, with winter snows expected to start falling within a month.

A young man in his twenties complained that the tents were being sold at a nearby government shop for 200 lira, or around $110. He said the shop assistant was selling them to friends for a cheaper price and he decided against buying.

The Red Crescent distributed up to 13,000 tents, and was preparing to provide temporary shelter for about 40,000 people, although there were no reliable estimates of the number of destitute people.

"I don't think the Red Crescent was successful enough in giving away tents. There is a problem on that matter," Huseyin Celik, AK's deputy chairman, said on Monday. "I apologize to our people."