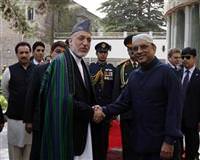 Turkey hopes talks it is hosting between the presidents of Pakistan and Afghanistan in Istanbul on Tuesday will reduce their deep mutual mistrust and begin a new period of cooperation between the two neighbours.

Bilateral relations have been marred by accusations that each is helping militant enemies of the other, and Afghan officials have said they suspect Pakistani intelligence of backing the Taliban and its insurgent ally the Haqqani network.

One Turkish official, saying that the regional environment is deteriorating, added: "Now is perhaps the time to try to reverse the course."

"We sense that they have a genuine wish to talk to each other because they realise this trend is not helping either of them," the official said, speaking on the eve of Tuesday's summit between Presidents Hamid Karzai of Afghanistan, Asif Zardari of Pakistan and Abdullah Gul of Turkey.

There has been a flurry of speculation about drawing the Taliban and Haqqani group into negotiations to end the fighting in Afghanistan, a subject of mounting urgency ahead of U.S. combat troops' withdrawal by the end of 2014.

Karzai, underlining Afghan suspicions that Islamabad is backing the Taliban, has said that any negotiations he has should be with Pakistan.

Significantly, Pakistan's military chief General Ashfaq Kayani will meet his Afghan counterpart on the sidelines of what will be the sixth summit between the three leaders.

The trilateral talks will be followed by a regional conference on Afghanistan to be attended by Indian Foreign Minister S.M. Krishna and their counterparts from France and Germany, among others. U.S. Secretary of State Hillary Clinton cancelled her trip because of the ill health of her mother.
Many Afghans believe Pakistan is supporting the Taliban in order to regain influence in Kabul once Western forces leave.

Afghan officials believe the assassination in Kabul on September 20 of former Afghan president Burhanuddin Rabbani was ordered by Taliban leaders they say are based in the southwest Pakistan city of Quetta.

Pakistan has also come under pressure from Kabul and Washington over allegations that its Inter-Services Intelligence Directorate (ISI) has close ties with the Haqqani group, which operates inside Afghanistan with a rear base in the Pakistani tribal area of North Waziristan.

Pakistan has denied the allegations, and officials have called on Afghanistan and U.S. forces there to act decisively against anti-Pakistan militants operating from Afghanistan.

Karzai worried Pakistan by signing a strategic partnership with its arch-rival India earlier this month, stoking old Pakistani fears of encirclement by unfriendly neighbours on its western and eastern borders.

Turkey wants both sides to speak frankly at the Istanbul meeting. "We are also hoping to have those two countries sign modest cooperation protocols," the official said.

The post-summit conference, attended by 14 countries from the region and 13 involved in helping Afghanistan, is expected to agree on a document with confidence-building elements, he said.